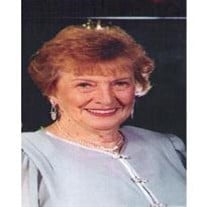 Ann Lizzul Sumberaz, 83, of Seabrook Village, Tinton Falls, passed peacefully from this life on Oct.3. Born September 3, 1924 in Greenwich Village, NY, she was a graduate of Cathedral High School and was head of the bookkeeping department at H. W. Robinson & Co, Inc. in NYC where she worked for more than 40 years. She and her husband, Artie, retired to Florida in 1984, from where they spent 18 wonderful years traveling the world, spending quality time with family and friends, and enjoying their "golden years". They moved to NJ five years ago. Ann had a beautiful singing voice and was a soprano soloist with the choir of St. George Church in NYC as a young woman. She passed her love of singing to her children and grandchildren, who will never hear "You Are My Sunshine" without thinking of her. She was an avid Yankees fan and a member of the Red Hat Society at Seabrook Village and although she suffered in recent years, she never completely lost her beautiful smile, her great sense of humor and the twinkle in her eye. She was a devoted daughter, wife, mother, grandmother, and friend. She will be deeply missed but has left behind countless wonderful memories. She was predeceased by her father Tony, mother Mary, and brother Bruno many years ago. She also tragically lost her son, Danny, in 1996 and although his family has missed him, it comforted them to know that he was in heaven to welcome her with open arms. She is survived by her loving husband of 56 years, Ottavio (Artie); her daughter Diann Turner and her husband Dennis of Pennsylvania; her daughter-in-law Laurie Sumberaz of Hawaii; her granddaughter Brianne McConnell and her boyfriend Andrew of New York; her grandson Graig McConnell and his girlfriend Kelly of Maryland; and her grandson Michael of New Jersey. Six years ago, through the marriage of her daughter, she acquired two new grandsons- Jay Turner of New Jersey and Chris Turner and his wife Sarah of Texas.

Ann Lizzul Sumberaz, 83, of Seabrook Village, Tinton Falls, passed peacefully from this life on Oct.3. Born September 3, 1924 in Greenwich Village, NY, she was a graduate of Cathedral High School and was head of the bookkeeping department at... View Obituary & Service Information

The family of Ann Elizabeth Sumberaz created this Life Tributes page to make it easy to share your memories.

Send flowers to the Sumberaz family.