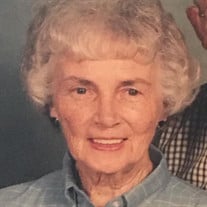 Anne Virginia Power, 92, of Tinton Falls, New Jersey, formerly of Edison, entered into eternal life on Saturday, April 21, at the Arbor Terrace senior living center in Tinton Falls. She grew up in Brooklyn, New York, and was a longtime New Jersey and North Carolina resident. Anne was born in Brooklyn on March 25, 1926, to John and Margaret (nee McIntyre) Clancy. After graduating from Erasmus Hall High School in Brooklyn, Anne joined AT&T Long Lines in Manhattan where she worked as a telephone operator. She met David F. Power in July 1946 following his discharge from the U.S. Navy and they were married on a rainy Easter Monday, April 18, 1949, in Brooklyn. During the 1950s they had five sons. Over the coming decades they lived primarily in the New York-New Jersey area, with the exception of one two-year period during which David’s job took them all over the country in a station wagon. Anne and David retired to Wilmington, North Carolina, in 1991. When David Power passed away in 2007, Anne returned to New Jersey to live out her remaining years. She was predeceased by her husband, David; her sister Joan Boyle and her brother, John “Gil” Clancy. She is survived by her five sons, David Power Jr. and his wife, Zenaida, of San Clemente, California; Andrew Power of Avon, Indiana; Thomas Power and his wife, Denise, of Chicago; Robert Power and his wife, Rhonda, of Toms River, New Jersey; and James Power and his wife, Nancy, of Tinton Falls; her sister Margaret Jones and her husband, Judge John J.J. Jones; eight grandchildren; and eight great-grandchildren. Visitation will be Tuesday from 6 to 8 p.m. at Bongarzone Funeral Home, 2400 Shafto Road, Tinton Falls, New Jersey. A funeral Mass will be offered at 10 a.m. Wednesday at Holy Innocents Church, 3455 W. Bangs Ave., Neptune, New Jersey. Condolences for the family may be directed to Bongarzone Funeral Home. In lieu of flowers, donations may be made to the Alzheimer’s Association. Envelopes will be available at the funeral home.

The family of Anne V. Power created this Life Tributes page to make it easy to share your memories.

Send flowers to the Power family.