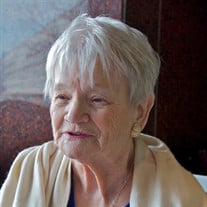 Aranka Schubert Polonyi, 98, died Thursday January 6, 2022, peacefully in her multigenerational home in New Jersey with all of her loved ones nearby. A picture of her mother was perched by her bedside. During her final days, her daughters and grandchildren surrounded her tenderly and warmly. They reminisced and shared stories of their years intertwined, played her Hungarian songs, and held her hand. At Aranka’s request, no service will be held. Her loved ones will celebrate her existence, nearly a century long, and grieve privately, intimately. In lieu of flowers, donations in memory of Aranka Polony may be directed to VNA of Central Jersey Hospice/VNA Health Group, Attn: Philanthropy Department, 23 Main St., Suite D1, Holmdel, NJ 07733 or www.vnahg.org Aranka was born Thursday March 8, 1923, in Gönc, Hungary. Etymologically, her name derives from the word gold. Aranka’s childhood in the countryside of Gönc was filled with fresh fruit from gyümölcsfák, or fruit trees, which she picked and savored with her older brother, Tibor, and older sister, Valéria. She and her late husband, László Polonyi, emigrated from Hungary in December 1956; two refugees of the Hungarian Revolution. They were granted political asylum and housed temporarily in Camp Kilmer, Piscataway, New Jersey. Later, they made a home together and raised their daughters in East Orange, New Jersey. Aranka and László did not speak English upon arrival in the United States. They had tiny cards inscribed with English translations of words and numbers tucked away in their wallets for when they required reminders. They learned English by watching television and by way of their daughters, who learned the language in school. Aranka had lake-blue eyes. She was a varrónő, or seamstress and a brilliant baker of traditional Hungarian walnut and poppy seed pastries (who baked dobos torte on birthdays). She was a beautiful singer and a violin enthusiast (being a descendant of the composer Franz Schubert, music was in her blood). And she was like a beloved second mother for her five grandchildren, whom she welcomed home from school daily in their youth with traditional Hungarian dishes made with paprika and love. Aranka is intensely loved, honored, and survived by her devoted daughters Elizabeth, Aranka, and Adrianna; by Adrianna’s husband John; and by her five adult grandchildren Gregory, Zachary, Mackenzie, Justin, and Aranka. She is our Matriarch, always. The strongest woman we know. We believe that when she left us here, she was welcomed home there by her mother, Anna Bodnar, by Tibor, by Valéria, and by László, all of whom she loved dearly. Aranka departed by way of the sun’s reflection on water, aranyhíd, or directly translated, a golden bridge.

Aranka Schubert Polonyi, 98, died Thursday January 6, 2022, peacefully in her multigenerational home in New Jersey with all of her loved ones nearby. A picture of her mother was perched by her bedside. During her final days, her daughters and... View Obituary & Service Information

The family of Aranka Schubert Polony created this Life Tributes page to make it easy to share your memories.