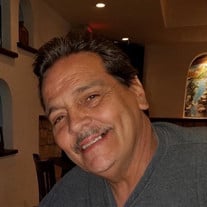 Ariel Gejo Jr., 62, of Ocean Township, died on Saturday, October 6, 2018 at Monmouth Medical Center, Long Branch from infectious gastric ulcers. Ariel was born in Havana, Cuba on June 21, 1956. Ariel and his family fled Castro’s regime in 1962. After a couple of months in Florida, the family was sponsored by the First Presbyterian Church of Asbury Park to relocate to New Jersey. Ariel lived with his family in Asbury Park, then Deal for a few years, and eventually moved to Ocean Township, where he lived most of his life. Ariel attended Bond Street School, was a Deal School alumni, and was a 1975 graduate of Ocean Township High School. Ariel was a lifeguard in his teenage years. In his adult life, Ariel worked for Coca Cola for several years, and then transitioned to become an achieved car salesman. He was proud and passionate about car dealerships and the industry itself, making friends and attracting customers with his infectious smile, charisma and friendly greetings to all who walked through his doors. After several concussions, he retired just a few months ago. Ariel had a happy personality, a friendly smile, a hearty laugh, a love for music and, most of all, he was an avid lover of all sports, especially the Yankees and the Giants. Ariel also loved children and so in his 20’s and 30’s, he coached Ocean Township Little League; his team named “Ariel’s Orioles.” Later, Ariel married Debbie Nelson, and together they had a son Tyler Gejo, whom he loved and adored. Ariel was predeceased by his father, Ariel Gejo Sr. on January 26, 1995, by his brother-in-law, Daniel W. Anderson Jr. on September 13, 2017, and his brother-in-law Charles (Buddy) Tetti on April 4, 1981. Surviving are his son, Tyler, his mother, Asela Gejo, who resides at Chelsea Assisted Living, Tinton Falls, and his three sisters, Mirta Anderson, Tinton Falls, Alicia Hartmann and her husband Bill of Delaware, and his sister Glady Falco and her husband Joey of Oakhurst. He will be missed by his many nieces, nephews and many grand nieces and grand nephews. Visitation will be from 3pm to 5pm on Wednesday, October 10, 2018 at the Bongarzone Funeral Home, 2400 Shafto Road, Tinton Falls, NJ. with a funeral service to begin at 4:30pm.

The family of Ariel Gejo Jr. created this Life Tributes page to make it easy to share your memories.

Send flowers to the Gejo family.