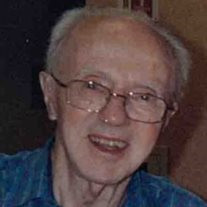 Arthur James Hausker, age 88, passed away on Friday, March 7, 2014 at the Seabrook Village Continuing Care Facility. Art was born January 6, 1926 in St. Paul, MN to Arthur and Emily (nee Bovaird) Hausker. He lived in Summit, NJ for 34 years before moving to Seabrook Village, Tinton Falls, NJ in 2009. He joined the Navy in 1943 and is a pensioned veteran, serving 20 years active and reserve duty. He received a BS degree in business from Macalester College in 1953 and began his career as analyst of municipal financing and bonds. His work moved him from St. Paul, MN to Chicago to New York and his last career work was at Fitch Investors Service. Surviving are his loving wife of 63 years Beverly (nee Nelson) Hausker and his three children and their spouses; Eric and Nancy (Sanchez) Hausker, Karl and Kathleen (McGinty) Hausker, and Karen and Paul Sherbine. His grandchildren are Arthur D., Julius and Andrew and wife Sara Hausker; Daniel and Matthew Sherbine; Tara, Alana and Allie Hausker. He is also survived by sisters Evelyn Wood, Bloomington, MN and Kathryn Pettee, Richland, WA. He is remembered fondly for his love of family, his honesty and integrity, his sense of humor, his love of nature, classical music and photography, and his concern and volunteer efforts for those less fortunate. Memorial service will be held on Saturday April 5, 2014 at 11:00am at the Unitarian Universalist Congregation of Monmouth County, 1475 W. Front St., Lincroft, NJ. A reception will follow the service. Memorials to Art can be made to the National Parkinson Foundation, Gift Processing Center, P.O. Box 5018, Hagerstown, MD , 21741(or online via www.parkinson.org)

The family of Arthur J. Hausker created this Life Tributes page to make it easy to share your memories.

Send flowers to the Hausker family.