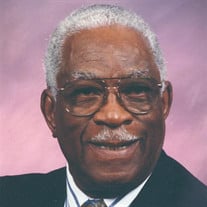 Benjamin Vernon Stewart, 96, of Tinton Falls, passed away peacefully on Saturday, December 21, 2019. Born on March 24, 1923 in Memphis Tennessee, he was the son of the late Benjamin Franklin and Willie Mae Oliver Stewart. Raised in South Bend Indiana, he attended South Bend Central Jr and Sr High Schools and studied mechanical machine operation at South Bend Vocational school. On February 12, 1942, he was drafted into the military and was assigned to the Headquarters 28th Cavalry Regiment - 2nd Cavalry Division. In 1944, he volunteered to be deployed to Piombino, Italy as part of the Headquarters Company of the 370th Infantry Regiment, a component of the 92nd Infantry Division of “Buffalo Soldiers,” one of America’s last segregated wartime forces, as a radio operator. He served with his regiment until the end of the war and received the Combat Infantryman Badge. After the war, he was assigned to the Headquarters Company of the 482nd Aviation Squadron – 12th Air Force Special Service NCO in Firenza, Italy. After he was honorably discharged, Ben lived and worked in various capacities in Puerto Rico and St. Croix. On November 25th, he married the former Mary Elizabeth Williams of Asbury Park NJ. He worked for the Prudential Insurance Company in Newark, NJ as the Head Operator of Mainframes until his retirement in 1988. After retirement, Ben and Mary moved to the Tinton Falls area. He was a member of the Tinton Falls Historical Society, the Asbury Jordan Lodge No. 142 F &AM Masonic Lodge in Neptune, and Ballard United Methodist Church of Asbury Park where he served on the Administration Council, the Adult Choir and the Finance committee. He was predeceased by his parents, Benjamin Franklin and Willie Mae Oliver Stewart, his siblings, William Waltham Stewart, Raul Robeson Stewart and Wilma Ann Stewart Frazier, and his sons from a previous marriage, Nigel Alan Stewart, Ivan Jerome Stewart, Clinton Nelson Stewart and Benjamin Vernon Stewart Jr. He is survived by his loving wife of 52 years, Mary Williams Stewart and a host of nieces, nephews, cousins and friends.

Benjamin Vernon Stewart, 96, of Tinton Falls, passed away peacefully on Saturday, December 21, 2019. Born on March 24, 1923 in Memphis Tennessee, he was the son of the late Benjamin Franklin and Willie Mae Oliver Stewart. Raised in South... View Obituary & Service Information

The family of Benjamin Vernon Stewart created this Life Tributes page to make it easy to share your memories.

Send flowers to the Stewart family.