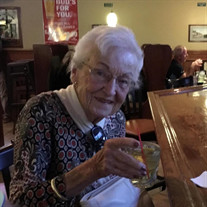 Catherine Veronica Reilly, a resident of Eatontown, passed away on March 16, 2020 at Monmouth Medical Center in Long Branch, less than five months before her 97th birthday. She died as she lived, with dignity, grace, faith in God, and in the... View Obituary & Service Information

The family of Catherine V. Reilly created this Life Tributes page to make it easy to share your memories.

Catherine Veronica Reilly, a resident of Eatontown, passed away...

Send flowers to the Reilly family.