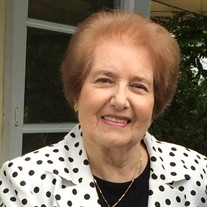 Cecilia T. Gadenz, 82, of Tinton Falls passed away on October 28, 2019, after suffering a stroke two weeks earlier. She was born in Tonadico di Primiero, a small village in the province of Trent in the Italian Alps. She grew up there and studied to become a language teacher. She also worked as a nurse, and later became a manager of a resort hotel. She was predeceased by her parents Giovanni Battista Turra and Margherita Albina Della Piazza, as well as her siblings Lina, Rita, Fr. Albino, Paolo, and Lino. She is survived by her husband of 56 years, Renato, her daughter Maria and husband Michael Stanton, her son Rodolfo and wife Amalia, her son Fr. Pablo, and her grandson Joseph Stanton. In 1961, she met Renato and they were married in Tonadico in 1963 by her brother Fr. Albino. Because of Renato’s graduate studies and work, she lived in Chile where her children were born, then moved with her family to Los Angeles, California in 1969, and finally to Tinton Falls, New Jersey in 1973. Besides knowing Italian and German, as a result of these changes, she had to learn Spanish and English, and she adapted well to the new cultures. She was particularly happy when she came to this country and eventually became an American citizen. She took care of every detail at home, especially when the children were growing up, and always prepared delicious Italian meals. She was a very loving, caring, and dedicated wife and mother! As the children went off to college, she worked as an Italian language teacher for several language schools in New Jersey, and also had her own private students ages 10 to 90. She also worked as a visiting home health aide. She was always very supportive and proud of her husband, children, and grandson. She liked to travel and many times accompanied her husband on business trips abroad. Besides spending time with family and friends, she enjoyed reading, knitting, taking care of her plants, and listening to piano music, especially when played by Fr. Pablo. She will be greatly missed, but her strong faith and love will be a lasting legacy for all who knew her. She was a communicant of St. Dorothea R.C. Church in Eatontown, New Jersey. For many years she was a member of the Prayer Group there and participated in the Bible Studies offered at the church for over 25 years. She also served as a Minister of Holy Communion, bringing the Eucharist to sick people in homes and the Rehabilitation Hospital of Tinton Falls. She successfully proposed having one day a week of Eucharistic Adoration at St. Dorothea, a program that is now in its 15th year. She was a member of several groups that pray daily for the needs of others. She had many loving friends, especially at St. Dorothea, and many sought her support in prayer or advice. Her funeral Mass will be at St. Dorothea R.C. Church on Saturday November 2nd at 10 AM. Viewing will be at Bongarzone Funeral Home in Tinton Falls on Friday November 1st from 2 to 4 and from 7 to 9 PM. Interment will follow at Mount Carmel Cemetery, West long Branch. In lieu of flowers, her wish was that donations be made to the St. Vincent de Paul Society of St. Dorothea, 240 Broad St., Eatontown, NJ 07724.

Cecilia T. Gadenz, 82, of Tinton Falls passed away on October 28, 2019, after suffering a stroke two weeks earlier. She was born in Tonadico di Primiero, a small village in the province of Trent in the Italian Alps. She grew up there and studied... View Obituary & Service Information

The family of Cecilia T Gadenz created this Life Tributes page to make it easy to share your memories.

Cecilia T. Gadenz, 82, of Tinton Falls passed away on October...

Send flowers to the Gadenz family.