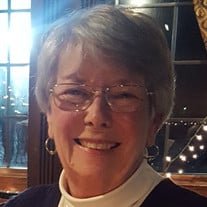 On Friday, February 26, 2021, Christine Clara Russo, passed away at the age of 77 with family members by her side. Christine was born on December 19, 1943, in New York to Otto and Sylvia Beuttenmueller. She was preceded in death by her mother, father, sister Sylvia Burton and brother Robert Beuttenmueller. Married for 46 years to Louis John Russo, Jr., she is survived by her husband, four children, Donna Sheeser Underwood, Barbara Sheeser Granger (Joseph F. Granger III), Donna Marie Russo, Diane Russo Herring (Teresa Ann Creel), and eight grandchildren, Louis James Herring (Lisa Buro Herring), Nicholas Arthur Herring, Joseph F. Granger IV, Camden Kenneth Underwood, Kelly Margaret Granger, Devon William Underwood, Jolie Kathleen Granger and Braden Christopher Underwood. Christine graduated from Valley Stream North High School in Franklin Square, New York. Her career as an executive administrative assistant with Analytics and Sytex spanned 25 years. In retirement, Christine was active in Women’s Club of Tinton Falls, The Red Hat Society and Luther Memorial Church, Tinton Falls, New Jersey. Christine was a dedicated wife, daughter, sister, mother, grandmother and friend and she cherished each role. She engaged every person who crossed her path with a welcoming and genuine affection. Christine will be remembered for her uplifting spirit that will carry on in the many lives she touched. She was beloved by all. Two services will take place. First, immediate family will gather for a private service at Bongarzone Funeral Home, Tinton Falls, New Jersey, on Saturday, March 6, 2021. The family will host a celebration of life to be announced later in the year. In lieu of flowers, donations can be made in her name to the St. Jude’s Children’s Hospital. https://www.stjude.org/give/memorials-and-dedications.html An online Life’s Tribute page is available www.bongarzonefuneralhome.com

On Friday, February 26, 2021, Christine Clara Russo, passed away at the age of 77 with family members by her side. Christine was born on December 19, 1943, in New York to Otto and Sylvia Beuttenmueller. She was preceded in death by her mother,... View Obituary & Service Information

The family of Christine C. Russo created this Life Tributes page to make it easy to share your memories.

Send flowers to the Russo family.