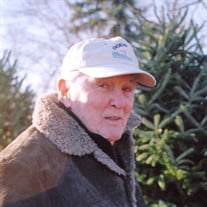 Daniel McGarry, 97, of Tinton Falls, passed away at his home on February 25, 2019. He was born in New York, N.Y. on June 29, 1921 to the late Daniel Christopher and Jane (Farrell) McGarry. He is predeceased by his brother John and his sisters Edna (Hall) and Anne (Dall) and his son Daniel Paul, Jr. He is survived by his beloved wife Rosa Maria, his son James, his daughter Rosemarie Farrow, son-in-law James Farrow, daughter-in-law Sandra McGarry, his grandchildren Richard Mendes, Daniel, Ryan and Christine McGarry, and Bridget and Jane Farrow. He also leaves behind his family in Costa Rica, his nieces and nephews, and many friends. Daniel grew up in New York City during the great depression and he and his family worked in order for him to enter the seminary. He was ordained Rev. Nathaniel D. McGarry, Friar Minor Conventual on May 19-20, 1951.He studied at Catholic University and Fordham University and earned multiple degrees in Theology and Psychology. He did some clinical doctoral work at Bellevue hospital while studying at Fordham. He was a founder at St. Jude's Parish in Manhattan for his work in erecting the school's building in 1952. During his years as a priest he spent most of his time as a Missionary in Costa Rica at St.Francis College in Moravia, San Jose as well as bringing Catholicism to the more remote areas of the country. Dan married his wife Rosa Maria in 1965 and began working as a Child Psychologist for the City of New York. During his tenure with the New York public school system Dan worked with some of the city's most troubled youth. He gained several accolades and recognition for his work and accomplishments. At this time he was also a notable presence at his parish St. John Nepomucene in Guttenburg, N.J. where he was active and served as several terms as the school's PTA president. Dan eventually retired to Tinton Falls and spent several years with his wife as care taker for his father and kitchen table counselor to any in need. The doctor was always "in". His door was always open to the poor and the poor in spirit. He and his wife provided shelter to the homeless, food to the hungry and comfort to any in need. He spread happiness and love liberally. He loved his family, sports, whiskey, and a laugh. He loved his God above all things and served as father figure and spiritual guide to many. He will be missed by many but his legacy of love and light will live in the lives he touched. Visitation will be held 4:00 to 8:00pm on Friday, March 1, 2019 at Bongarzone Funeral Home, 2400 Shafto Road, Tinton Falls, N.J. Mass of Christian Burial will be held at 9:00am on Saturday March 2, 2019 at the Parish of St. Mary, 1 Phalanx Road, Colts Neck, N.J. At the family's request, please meet at the church on Saturday. Rite of Committal will follow at Monmouth Memorial Park, 4201 Route 33, Tinton Falls, NJ.

Daniel McGarry, 97, of Tinton Falls, passed away at his home on February 25, 2019. He was born in New York, N.Y. on June 29, 1921 to the late Daniel Christopher and Jane (Farrell) McGarry. He is predeceased by his brother John and his sisters... View Obituary & Service Information

The family of Daniel P McGarry created this Life Tributes page to make it easy to share your memories.

Daniel McGarry, 97, of Tinton Falls, passed away at his home...

Send flowers to the McGarry family.