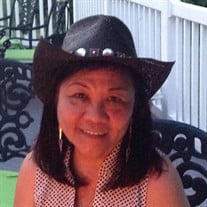 Dieu Thi Lister, age 67, of Eatontown, passed away in her home on Thursday, December 7, 2017 after her fight with cancer. She was born on December 23, 1949 in Saigon, Vietnam. She was one of seven siblings and is predeceased by her mother, father and youngest sister. She had worked as an assembler for micro soldering at Eaton in Long Branch, New Jersey. Dieu escaped war-torn Vietnam in 1970 and became a patriotic American citizen in 1973. She married the love of her life, Michael Lister, on August 27, 1976, and they raised three children together. Dieu’s happiest moments were with her beloved husband, children and grandchildren. She enjoyed all the family get-togethers, including birthday celebrations, holiday gatherings, family vacations and the many hallmark moments in life. Christmas was her favorite holiday. One of her favorite pastimes was cooking for her family. And oh could she cook! Vietnamese phở, bánh canh, eggrolls, summer rolls and even Italian and American cuisine that she learned after she came to America. Other passions included singing karaoke, working in her vegetable garden, rooting for the Yankees, late-night crabbing, fishing on the Navesink, and visiting Atlantic City to play the slot machines. She lives in our hearts and leaves many fond memories to all who knew her. Dieu is survived by her husband, Michael Lister; her three children, Billy Lister and his wife Jeannie, Maria Wolf and her husband John, and Michael J. Lister and his fiancée, Valentine Vollmer; her four grandchildren, Brittany Wolf, John M. Wolf, Danielle Lister and Lauren Lister; her future grandchildren, Alexandra Vollmer, Vivian Vollmer and baby girl Lister due in May 2018; her mother-in-law, Rosemarie Lister; and her many brothers, sisters, nieces and nephews. Visitation will be held on Sunday, December 10, 2017, from 12:00 p.m. to 2:00 p.m. at Bongarzone Funeral Home, 2400 Shafto Road, Tinton Falls, New Jersey. All other services will be private.

Dieu Thi Lister, age 67, of Eatontown, passed away in her home on Thursday, December 7, 2017 after her fight with cancer. She was born on December 23, 1949 in Saigon, Vietnam. She was one of seven siblings and is predeceased by her mother,... View Obituary & Service Information

The family of Dieu Thi Lister created this Life Tributes page to make it easy to share your memories.

Dieu Thi Lister, age 67, of Eatontown, passed away in her home...

Send flowers to the Lister family.