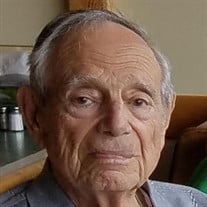 Domenic R Falcone, 92, resident of Seabrook Village, Tinton Falls passed away on Tuesday January 23, 2018. Born Jan. 8, 1926 to Lucy (nee Franchino/Franklin) Falcone and Anthony Falcone in Orange, NJ. He lived in Orange for 32 years before moving to Livingston, NJ August 13, 1958. He lived in Livingston for 56 years. He enlisted in the United States Air Force on Sept. 13, 1943 and was called to active duty April 4, 1944. He served as Radio and Radar Technician on B-17 and B-29 long range heavy bombers to May 9, 1946. Domenic attended Seton Hall and Rutgers Universities. He married Helen Marie Davis on November 10, 1951 and had four children. He retired from Bell Telephone Laboratories on Dec 31, 1989. Domenic was a Past Grand Knight of the Knights of Columbus 13533, Livingston, Sir Knight of St. Isaac Jogues Assembly, Past Treasurer of Comboni Missionary Support Group, Montclair, Past President and Treasurer of the Livingston Public Broadcast Committee channel 34, Member of AARP Chapter #3663, Den Dad of St. Philomena Cub Scout Pack 56 and Volunteer with both St. Barnabas Medical Center and St. Barnabas Hospice and Palliative Care Center. He is survived by his wife, Helen and his children, Richard and Marie Falcone, Mary Anne and Michael Magliaro, Anthony and Kathleen Falcone, Kathleen Marie and Thomas Newman. His six grandchildren, Brian & Kellie Newman, Christina & Anthony John Falcone, and Gene & Landa Magliaro. He was predeceased by his sister Mary Falcone Mercurio. Visitation will be held on Thursday January 25 from 4-8pm at Bongarzone Funeral Home, 2400 Shafto Road, Tinton Falls. A funeral mass will be held on Friday at 1:15pm at St. Philomena Church in Livingston. Entombment to follow at Gate of Heaven Cemetery in East Hanover, NJ. No visitation on Friday, the family asks that you go directly to the church. In lieu of flowers, please make a donation to a charity your choice. For online condolences, please visit www.bongarzonefuneralhome.com

The family of Domenic R Falcone created this Life Tributes page to make it easy to share your memories.

Send flowers to the Falcone family.