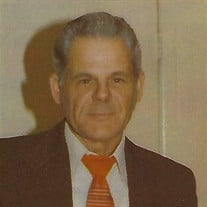 Dominick (“Donald”) T Fusco, 92, of Seabrook Village in Tinton Falls, NJ, passed away on Friday January 27, 2017 at home. He was born in South Orange, NJ and had been a resident of Seabrook Village since 2005. For 35 years Don worked in construction as a heavy equipment operator and member of the International Union of Operating Engineers Local 825. He retired in 1993. Don was a veteran of WWII serving in the United States Army from April 1943 to March 1946 with an occupational specialty in truck driving. He was awarded a World War II Victory Medal, a Good Conduct Medal, and an E.A.M.E Campaign Medal, all earned in the European theater. He was predeceased by his beloved wife Audrey, with whom he lived on Brookfield Avenue in Nutley, NJ from 1954 until her passing in 2004. Their only child, Donald (“Donnie”), passed away in 1996 shortly after earning a Masters Degree in Speech-Language Pathology at Columbia University. Not long after Don moved to Seabrook, his late wife’s sister Brenda (mother of Robert and Jeff) moved to Seabrook. Until her sudden death in 2012, Brenda and Don met every day to share a meal in the Seabrook dining hall and sometimes to drive to outings and shopping. Many residents in the large Seabrook community assumed, incorrectly, that Don and Brenda were a married couple. Don was the second oldest of the seven children born of Benjamin J Fusco and Alice R Fusco. With Don’s passing, third oldest sibling Lucille Grace Connolly is the last. Their sister Antoinette (“Bobby”) Lansing (husband of Mel and mother of Kim, Sandra, Stephen, and Ronald) passed away on December 8, 2016. The four remaining departed siblings are Jeanette (the oldest), Charles, Anna, and Kathleen (the youngest). The reason Don was actually named Dominick is because his paternal grandfather was named Dominick. Both Don’s father Benjamin and grandfather Dominick were born in Italy. Don was an avid league bowler for many decades. He continued bowling until his bad back became too problematic, after which he gave Audrey’s sister Brenda’s son Robert expert coaching in bowling fundamentals. During his post-bowling phase, Don enjoyed trips to Atlantic City with Brenda’s son Jeff. Don became surprisingly good at the advanced fundamentals of blackjack. Don loved to watch television, especially sports. He was one of the first to own a giant screen TV back in the 1980’s. At Seabrook he enjoyed his massive 70” flat panel television equipped with multi-media soundbar and a giant woofer. Throughout his stay at Seabrook, Robert and Jeff tried gamely to bring Don into the computer age. Over the years Don had several personal computers, a specially customized mobile phone, and even had his room lights connected to an Amazon Echo that responded to his voice. At Seabrook after complications from his bad back became debilitating, Don became fond of his motorized power wheelchair. Every day he scooted to pick up his meal, and each Tuesday he scooted to his weekly pinochle game. Jeff and Robert spent many hours working with Don on physical rehabilitation therapy. Don’s passing away was totally unexpected, instant, and painless. His heart stopped, he hunched over in his wheelchair, and was gone before his head even touched the carpet. Visitation will take place on Sunday, March 5 at 12:30 PM with a memorial service at 1:30 PM at Bongarzone Funeral Home, 2400 Shafto Road, Tinton Falls. In lieu of flowers, donations may be made to the Salvation Army National Corp.

The family of Dominick T. Fusco created this Life Tributes page to make it easy to share your memories.

Send flowers to the Fusco family.