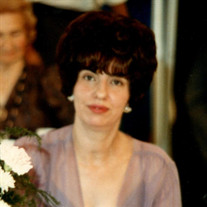 It is with heavy hearts that we say goodbye to our mom Edna Alexandria Kochansky, who, after a long-blessed life, passed peacefully in her sleep on February 13, 2020. Edna was born and raised in North Arlington, NJ. In her youth, she was a member of her highschool glee club. She often told stories about her cherished memories of growing up in the 50s with her four siblings and their favorite hangout “Eddie’s”. In North Arlington, she met the love of her life, John Kochansky. They married in March of 1957 andcelebrated a marriage of 59 years. Edna and John moved to Port Reading NJ, where she was a member of the Catholic Women’s Organization of Saint Anthony of Padua. As the family grew, they relocated to the town of Tinton Falls where they remained for over 50years. Edna was an involved parent as a scout leader and head pop warner cheer coach. She was also a member of several bowling leagues. Edna was employed as a bookkeeper at Healthfair Vitamin Centers in Little Silver, NJ for over 25 years, as well as, Mark Joseph Salon. In addition, she ran the family business of EdKay Builders, with her husband, John; all while being a mother of four children. Edna was known throughout her immediate and extended family for hosting the most wonderful Christmas gatherings with music and card games being focal points of the holiday. Edna was an avid reader, creative writer and lover of a nice, hot cup of tea. She lovedmusic, especially country, which was almost always playing in the background in her kitchen. Edna adored her family as much as we adored her. She was a loving daughter, wife, mother, grandmother, great grandmother, sister, aunt, great aunt and friend. Shewill be greatly missed by all who loved her. She is pre-deceased by her parents Joseph and Nora Yodlowski; her brothers, Joseph and Raymond Yodlowski; her twin sister, Winifred Yocus; her husband, John Kochansky, Sr.; and her son John Kochansky, Jr. Edna is survived by her daughter and son-in-law, Karen and Rick Farrah of Eatontown, NJ; her daughter, Krissy Montuoro of Belmar, NJ and her daughter Linda Clark of Long Branch, NJ; daughter in law Donna Kochansky; her grandchildren Ricky, Jenny, Jamie, JeffKarly, Heather, Carrie, Lacey, Summer, Alexandria and Robbie; her great grandchildren; Josephine, Wilson, Katheryn, David Jr., Joshua, LilyJean, Jaxon and Kenzi Jayme. Visitation will be held 1pm to 5pm on Sunday February 16, 2020 at the Bongarzone Funeral Home, 2400 Shafto Road, Tinton Falls. A funeral service will begin at 4:30 pm on Sunday. All other services will be private. In lieu of flowers donations in her memorymay be made to: Chelsea Senior Living, 1 Hartford Drive, Tinton Falls, NJ. 07724 please put Alzheimer’s NJ in memo line. For online condolences and directions please visit her memorial website at www.bongarzonefuneralhome.com.

It is with heavy hearts that we say goodbye to our mom Edna Alexandria Kochansky, who, after a long-blessed life, passed peacefully in her sleep on February 13, 2020. Edna was born and raised in North Arlington, NJ. In her youth, she was a member... View Obituary & Service Information

It is with heavy hearts that we say goodbye to our mom Edna Alexandria...