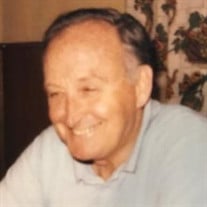 Edward R. Averill, 96, of Seabrook Village Tinton Falls, NJ passed away on Saturday December 31, 2016. Edward was born and raised in Brooklyn, NY and graduated from St. Michael’s High School. He then attended Manhattan College in Riverdale, NY on a track scholarship where he graduated in 1943 with a Bachelor of Science Degree in Chemistry. While in college he captured the 1943 Championship of America - College One Mile Relay at the Penn Relays. After college he served in the U.S. Army Air Corp during World War II in the Pacific Theatre mostly on Guam. Following the war he married Claire Flynn on November 9, 1946. They moved to Queens Village, NY where they raised six children. In 1977 they moved to the Wayside section of Ocean Twp. and has been a resident of Seabrook Village since 2014. Ed started his career as a chemist for Radium Chemical Company and then joined Continental Insurance Company in New York where he worked as an Industrial Hygienist for 20 years. He continued his career as an Industrial Hygienist for the Mobil Oil Corporation of New York for 25 years, retiring in 1984. He was a long time member of the American Industrial Hygiene Association. After retirement he travelled and enjoyed playing golf but the most important aspect of his life continued to be his family. Ed attended the Baptisms, First Communions, Confirmations, Graduations and Weddings of his grandchildren and great grandchildren. He also attended many of their concerts, recitals and shows and many, many sports events. He cheered everyone on at their basketball, baseball, football and soccer games. Ed could be seen on the sidelines of track meets encouraging his grandchildren as he kept their time with his old windup stop watch. As an active member of Our Lady Lourdes parish in Queens Village, he coached CYO track and was a member of the Holy Name Society and the Sports Committee. Later, he became an active member of St. Anselm parish volunteering as a Eucharistic Minister. He is predeceased by his parents Henry and Mary Averill and his four siblings: William, Joseph, Elizabeth and Henry. After 46 years of marriage his beloved wife Claire died in 1993. Surviving are his loving children: Kevin (Mimi) Averill, Marilyn (James) Byrne, Bradley E. Averill, Veronica (Steven) Sobieski, Dennis (Joan) Averill and Dr. Francis (Rose) Averill. He is also survived by his 11 cherished grandchildren: Lauren, Jackie, Erin, Michael, Brian, Ashley, Andrew, Caitlin, Ryan, Dan and James and 8 great grandchildren: Samantha, Kaelyn, Christopher, JP, Molly, Amelia, Ryan and Benjamin. Relatives and friends are invited to attend the visitation on Thursday, January 5th from 2pm to 4pm and 7pm to 9pm at the Bongarzone Funeral Home, 2400 Shafto Road, Tinton Falls, NJ. A funeral mass will be offered 10 am on Friday, January 6th at the Church of St. Anselm, 1028 Wayside Road, Tinton Falls. Interment to follow at Brigadier General William C. Doyle Memorial Cemetery, 350 Province Line Road, Wrightstown, NJ. The family requests, in lieu of flowers, donations may be made in his memory to: Mercy Center, 1106 Main Street, Asbury Park, NJ 07712 or the Foodbank of Monmouth and Ocean Counties, 3300 Highway 66, Neptune, NJ 07753.

The family of Edward R. Averill created this Life Tributes page to make it easy to share your memories.

Send flowers to the Averill family.