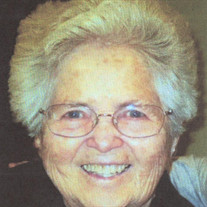 Florence M. Vogel Beloved aunt, friend and teacher “Our love should not be just words & talk it must be true love that shows itself in action.” 1 John 3:18 Florence M. Vogel entered eternal rest on April 21, 2016 surrounded by the loving circle of her family and close friends. She was born and raised in Newark. Florence was an avid Yankee fan and never tired of telling happy stories of her childhood in Newark and family shore house in West Deal. Her life as an educator continued thru her brief hospice stay as she reminded every family member nuggets of life and love to treasure. Her vocation as a Sister of Charity began in 1951. She never left the bond of faith and loyalty she had with her friends of over sixty years. She received her Master’s degree from Catholic University. Her teaching career expanded over forty seven years. Her students will remember her firm expectations and ability to bring great literature to present time. She was the first woman to teach at CBA, Lincroft. She retired from Long Branch HS as English Dept. Supervisor. She now joins her parents, Charles and Florence Vogel, loving sister and brother in law, Mary Jo & Jerry Tivenan, brother Rev. Charles Vogel, beloved niece Marybeth and grand nephew Kevin. She is survived by her loving nieces and nephews, Charles Tivenan, Christopher Tivenan, Thomas Tivenan, Florence (Fonie) O’Brien, Paul Tivenan, Mark LoBello, Mary Jo Mackintosh and Patricia Pace and their families as well as circles of friends that will all miss her beyond words. Famous for her no fuss- general goodbyes her family follows her example of faith and inner strength during this time as her gift of a selfless life awaits her. Visitation is from 4-8 p.m. on Monday, April 25, 2016 at Bongarzone Funeral Home, 2400 Shafto Road Tinton Falls. A Funeral Mass will be held at the Church of St. Anselm, Tinton Falls at 10:30 a.m. on April, 26, 2016. In lieu of flowers, donations can be made to: The Sister’s of Charity, Development Fund, P.O. Box 476, Convent Station , NJ 07961-0476.

Florence M. Vogel Beloved aunt, friend and teacher &#8220;Our love should not be just words & talk it must be true love that shows itself in action.&#8221; 1 John 3:18 Florence M. Vogel entered eternal rest on April 21, 2016 surrounded by the... View Obituary & Service Information

The family of Florence M. Vogel created this Life Tributes page to make it easy to share your memories.

Send flowers to the Vogel family.