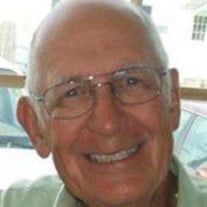 Frank Cree, a resident of Seabrook Village Center, Tinton Falls, formerly of Kenilworth and Lavallette, beloved husband of Genevieve Ciemniecki Cree, father and grandfather died peacefully surrounded by family on Feb. 20, 2021. He was 95. Frank is survived by Genevieve whom he married on Sept. 7, 1947. They recently celebrated a 73rd wedding anniversary. He is also survived by daughters, Diane Cree Kane, Virginia, and Brenda Cree, New Jersey; granddaughters Rebecca, Teresa and Emily Kane, Oregon; and grandsons Matthew Hartman, Colorado, Ethan Hartman, Pennsylvania, and numerous nieces and nephews. Great-granddaughter Aero Cree Mondari, daughter of Emily, was born on Aug. 16, 2020. He is predeceased by his Grandson Adam Hartman in 2016. Frank was born on Feb. 13, 1926 in Prescott, Arizona, but lived his entire life in New Jersey. He is the son of Elsie (Schwencke) Cree Rauch and Joseph Wheat Cree. He was the last surviving member of his immediate family, which included brothers Hobart, Joseph, Fred and Ross Cree. His ancestors resided in New Jersey dating back to Revolutionary War times. He grew up in Garwood, where his family owned and operated Cree's Lunch. He attended Garwood elementary school and Dayton Regional High School, Springfield. He was an avid basketball player in elementary and high school. After high school, he served in the U.S .Army Air Force from 1944-45. He and Gen resided briefly in Garwood and then moved to Kenilworth, living for 40 years in a home he built on Quinton Ave. until retiring. Frank was a self-employed carpenter and home builder during the 1950s. He was co-owner of a kitchen cabinet business, Proven Design, and later joined the Brotherhood of Union Carpenters in the 1960s. Most of his career was spent working as a construction supervisor for J.R. Prisco, Inc., of Summit, N.J. He oversaw construction of Bloomingdale's at the Short Hills Mall, built a clean room for Bell Labs computer, a leader board for Baltusrol Golf Club, and supervised renovations for the Sisters of Charity in Convent Station among other projects, including schools, office buildings and banks. He was admired for mentoring many co-workers. In Kenilworth, he served on the Board of Assessment and the Planning Board and was active with the local Democratic Party. Frank and Gen owned a shore home in Lavallette, N.J. from 1976. Both lovers of the New Jersey shore, they retired there in 1992, enjoying many happy times at the beach with family and grandchildren. While living in Lavallette, Frank also did volunteer construction consulting for the borough. During retirement, they traveled to Arizona and Florida to spend time with family and friends. They enjoyed frequent trips to Atlantic City. In 2005, they moved to Seabrook Village, where they made new friends and participated in many activities. Frank, who was known for his home movies, showed films for the residents and participated in weekly poker games. He was a lifelong sports fan, particularly of men's and women's college basketball, the New York Yankees and Mets baseball teams, horse racing and the Olympic Games. He loved to exercise, ride his bicycle and read. He was a fan of good glass of Scotch and the music of Johnny Cash, Patsy Cline and Frank Sinatra. Funeral arrangements are being handled by Bongarzone Funeral Home, 2400 Shafto Road, Tinton Falls. He will be interred at Brigadier General William C. Doyle veteran’s memorial cemetery in Wrightstown, N.J. All services are private at this time. The family will hold a Celebration of Life in the future.

The family of Frank Cree created this Life Tributes page to make it easy to share your memories.

Send flowers to the Cree family.