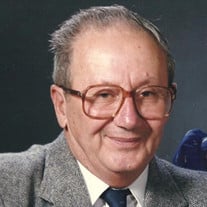 Frank Anthony Lastella, 89, passed peacefully at home on Monday April 13th, surrounded by his family. Born in Brooklyn NY, he attended White Plains High School. He joined the US Navy in 1944, serving during WWII as a radioman on the USS Ipswich PC-1186, a patrol and escort ship operating between the Panama Canal and Cuba until his discharge in 1946. He then moved to Eatontown and worked in his family’s Highway 35 business “Star Food Center”. In 1956, he joined the Bricklayers and Allied Craftsmen Local Union #5, and was a true artisan. His workmanship will be remembered in many of the most beautiful brick buildings in Monmouth and Ocean Counties. After being critically injured in a construction accident in 1984, Frank retired in 1986. He was an avid bowler and golfer. He enjoyed playing poker in Atlantic City, watching horse racing, especially at Monmouth Park, and owned a racehorse named Shining Lindy. He was one of the first coaches for the fledgling Eatontown-Ft. Monmouth Raiders Pop Warner football teams and later cherished the times he attended his grandchildren’s sports and cheer events. Frank was a parishioner of St. Dorothea’s Roman Catholic Church, a life member of both the Eatontown Fire Department and Eatontown First Aid Squad, a charter member of the Eatontown Elks #2402 where he was named “Elk of the Year” in 1993, and a member of VFW Post 2226 in Oakhurst. He was predeceased by his parents, Pasquale and Mary (Visicchio) Lastella, his son-in-law David Chachko, his brothers-in-law and sisters-in-law Peter Purrazzella, Esther Lastella and Stanley and Margaret Richards. Frank is survived by his wife of 62 years Doris M. (Bennett), his sons and daughters-in-law Frank and Tami, John and Diana, and James and Stacey, all of Eatontown, his daughters Barbara Chachko of Oceanport and Karen of Sarasota, Florida, his 8 grandchildren and spouses Brett and YounJoo Chachko, Sanbon, South Korea, Dennis and Katie Chachko, Lumberton, Michael Chachko, Oceanport, and Christopher, Gina, Trevor, Nicole and Jamie Lastella, all of Eatontown, and three great grandchildren Sandara, Avery and Cooper Chachko. He is also survived by his sister Rose Purrazzella, his brothers Pat and Mario Lastella, and many nieces, nephews and cousins. Family and friends are invited to visit on Wednesday April 15th from 2-4 and 7-9 at Bongarzone Funeral Home, 2400 Shafto Road, Tinton Falls. The Mass of Christian Burial is at 10:00 AM on Thursday morning at St. Dorothea’s RC Church, Broad Street, Eatontown, with entombment following at Woodbine Mausoleum, West Long Branch. In lieu of flowers, donations can be made to Eatontown Elks Special Children’s Fund, 216 Broad Street Eatontown, or St. Barnabas Hospice and Palliative Care Center, Long Branch.

Frank Anthony Lastella, 89, passed peacefully at home on Monday April 13th, surrounded by his family. Born in Brooklyn NY, he attended White Plains High School. He joined the US Navy in 1944, serving during WWII as a radioman on the USS Ipswich... View Obituary & Service Information

The family of Frank A. Lastella created this Life Tributes page to make it easy to share your memories.

Send flowers to the Lastella family.