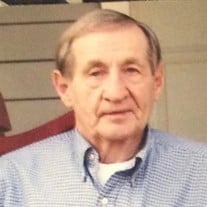 George Gardner Davidson, 87, of Eatontown, passed away 12:56 pm on Friday September 6, 2019 of a dementia related illness at Monmouth Medical Center, Long Branch. George was born in Brookline, Massachusetts January 12, 1932 and was a natural born athlete, participating in all sports. He attended Tufts college earning a Bachelor of Science degree in Electrical Engineering and was a member of the Varsity swimming team in 1956. He went on to receive his Master of Science in Engineering from Fairleigh Dickinson University in 1971. After attending Tufts College, George went into the Army and was stationed at Fort Monmouth. After his discharge from the Army he transferred into a civilian worker for the United States Army as an Electrical Engineer until his retirement in 1995. Playing hockey most of his life and coaching hundreds maybe thousands of kids in hockey, baseball and football in Monmouth and Ocean Counties. George was a premier hockey coach in the area in the 60’s,70’s, 80’s and early 90’s with some of those kids making it to the professional level. He was gifted with the ability and desire to spend countless hours volunteering his time helping kids reach their potential. George has battled Dementia for over 15 years, living at home to the very end. He was a great example of how people with Dementia and Alzheimer’s disease with the right care can live a life, although different, that provides inspiration, smiles, happiness to himself and others. He is predeceased by his wife Brenda in 2014 and his son Paul in 2018. Mourning his loss are his son Billy and his wife Rhonda, his son Scott, his daughter Sharon, his daughter Laura and her husband Ben Kennedy, as well as his grandchildren Dillon, Gabrielle, Annaliese and Celia. Visitation will be 4:30pm to 8:30 pm on Monday September 16, 2019 at the Bongarzone Funeral Home, 2400 Shafto Road, Tinton Falls. In lieu of flowers donations to the Alzheimer’s Association in his memory would be appreciated. For online condolences, directions and to view full obituary please visit his memorial website at www.bongarzonefuneralhome.com

The family of George G Davidson created this Life Tributes page to make it easy to share your memories.

Send flowers to the Davidson family.