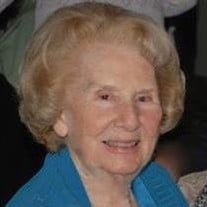 Gertrude Mahon Hughes, age 94, passed away peacefully with family by her side on Saturday, October 7th, 2017. Gertrude was predeceased by her husband of 48 years, John Patrick Hughes, originally from Harrison, New Jersey. Surviving Gertrude are her two children, Owen and Jean, her daughter-in-law, Allyson and her four grandchildren, Brittany, Evan, Cameron, and Reilly. She is also survived by her sister, Anne C. Walsh, many nieces and nephews, their spouses, their children and their children’s children. Gertrude was born and raised in Newark, the ninth of eleven children. She was predeceased by her parents, Matthew and Margaret (Cole) Mahon, nine siblings and ten in-laws; John (Marie) Mahon, Margaret (Robert) Reagan, Matthew Jr. (Cecilia) Mahon, Hugh (Irene) Mahon, James (Marie) Mahon, Mary (William) Clark, William (Molly) Mahon, Thomas (Margaret) Mahon, Joseph (Grace) Mahon and Donald Walsh. Gertrude will be greatly missed. She enjoyed being with her family and friends, was an avid golfer who played well into her late 80’s, enjoyed winters in Florida and time at the shore. A Memorial Mass will be on October 21, 2017, at 10:30 am at Our Lady of the Holy Angels Church in Little Falls, New Jersey. Greeting the family will begin at 9:30 am in the church. In lieu of flowers, donations in Gertrude’s memory can be made to New York Presbyterian Hospital, Office of Development, 654 West 107th Street, New York, NY 10032. Please include a memo requesting Gertrude’s gift is for the benefit of Lung Cancer Research.

The family of Gertrude Mahon Hughes created this Life Tributes page to make it easy to share your memories.