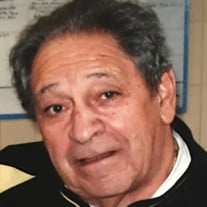 Joseph Pasquale Gaetano, 83, of Eatontown, passed quietly at home surrounded by his loving family. Joe was born in Spilinga, Italy in 1935, coming to America as an infant. Arriving in Newark, his family later settled in Long Branch, where Joe graduated from LBHS in 1954. He would eventually move with his family to Eatontown, where he was a life-long resident. Joe worked early on in life with the Monmouth County Sewage Authority, then he became a Realtor with Jamie Pavlis Real Estate in Eatontown. He also ran the infamous Double I Construction, with his partner, Pete McAuliffe, for many years. His love for his community and the people around him was more than evident by vast variety of organizations and volunteering he did. He served in the NJ Army National Guard, being Honorably Discharged in 1961. Joe was a Life Member of the Eatontown Engine, Truck, & Hose Co. #1, serving as Chief in 1977, Eatontown First Aid Squad, Life Member, Captain 1971 and President, Eatontown Senior Housing Board of Directors, Eatontown Elks #2402- Charter Member, Eatontown Kiwanis Club-Past President, Fireman’s Sunday Softball League- President/ Hall of Fame member, Navesink Masonic Lodge #9, Eatontown Traffic Safety Advisory Board, International Association of Old Bastard. One of Joe’s passions was volunteering his time in the interest of the children and schools in town. He served almost 23years between both the Eatontown Board of Education and the Monmouth Regional Board of Education. At MRHS, Joe served from 1995-2011, 2013-2018, where he served as Vice President from 2005-2011. He was also proud to have achieved the level of Certified Board Leader-2011 and Master Board Member while with Monmouth Regional. In the course of all his endeavors, Joe or Chief, would always be up for a good time. If he wasn’t leading the way for a fire department social event, he would be attending one for another department. He enjoyed playing golf, where if you needed, a cocktail could be found in his cart. Although he was a Philadelphia Eagles fan, his Giants family tolerated it for his sake. Poppy also loved to plant his gardens each summer, where he found numerous location to grow them. Later in life, Poppy’s love and passion became his grandkids and the many “adopted” kids who came into his life. He leaves behind a vast group of his “kids” that will forever be touched by his being in their lives. Joe was predeceased by his parents, Antonio and Margaret Gaetano, his wife Angela, and sister Julia. Surviving are his loving companion, Patricia Binkowski, his sister, Rosalie Sneath, daughters Dina Sabin and her husband Saul, Eatontown, Lisa Gaetano, North Carolina, Joseph A Gaetano, Tinton Falls , Anthony” Bubba “ Gaetano and his wife Shannon, Eatontown. His 13 grandchildren, Laura, Jennifer, Brandy, Sierra, Gabriella, Gianna, Maria, Erika, Mason, Presley, Danielle, Isabella, and Angelina. He had 4 Great-Grandchildren, Giovanna, Areiya, Luciana, and Natalia. Uncle Joe also leaves behind many, many loving nieces and nephews of the Sneath, Cannella, Yenesel, Campbell, Torreggiani, Gatti, and Cornman families. Visitation will be held on Sunday July 28, 2019 from 3pm to 8pm at the Bongarzone Funeral Home, 2400 Shafto Road, Tinton Falls. A funeral mass will be offered 10am on Monday July 29, 2019 at St. Dorothea’s Roman Catholic Church, 240 Broad Street, Eatontown, NJ. Interment to follow at Shoreland Memorial Gardens Cemetery, Hazlet, NJ. The family has requested for everyone to go directly to church on Monday. In lieu of flowers donations in his memory may be made to: National Multiple Sclerosis Society, Aspen Corporate Park 1, 1480 US Highway 9 North, Suite 301, Woodbridge, NJ 07095 (nationalmssociety.org) would be appreciated. For online condolences, directions and to view full obituary please visit his memorial website at www.bongarzonefuneralhome.com.

Joseph Pasquale Gaetano, 83, of Eatontown, passed quietly at home surrounded by his loving family. Joe was born in Spilinga, Italy in 1935, coming to America as an infant. Arriving in Newark, his family later settled in Long Branch, where... View Obituary & Service Information

The family of Joseph P. Gaetano created this Life Tributes page to make it easy to share your memories.

Send flowers to the Gaetano family.