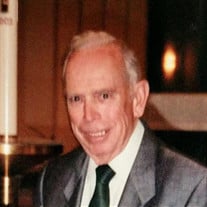 Joseph Francis O’Connor, 91, passed away peacefully on Thursday, January 23rd. He was born on Easter Sunday, April 8th, 1928 in Jersey City, New Jersey. He graduated from both St. Peter’s Prep High School and St. Peter’s College in Jersey City. He proudly served his country in the U.S. Army reaching the rank of 2nd Lieutenant before being honorably discharged in 1957. Joseph went on to a 30 plus year career working as a Chemist at Mallinckrodt Chemical Works in both Jersey City and St. Louis, Missouri before retiring in 1986. He was predeceased by the love of his life, wife Barbara (Plunkitt) and his oldest son, Joseph Peter O’Connor. Also, he was predeceased by his brother, Andrew O’Connor and sister-in-law, Christine O’Connor. He was a loving father to his daughter, Kathy O’Connor and husband, Pat Curry, as well as his son, James O’Connor and wife, Gina O’Connor. However the true pride and joy of his life, was his grandchildren. He was an attentive, devoted Pop Pop to Siobhan Curry and Ben Homan, Sean and Katerina Curry, Trevor O’Connor, and Caitlyn O’Connor. Most recently, he joined the Great Pop Pop Club with the birth of his great grandson, Aiden James Curry. Over the years, he truly also enjoyed being Uncle Joe to many nieces, nephews, and grand nieces and nephews. Joe was known for his love of football and baseball primarily rooting for the New York Mets and New York Giants and was a die hard fan for both of these teams. Many community members and family friends will remember Pop Pop as an avid attendee at any and all sporting events for his grandchildren in both New Jersey and on many occasions traveling cross country to St. Louis to also participate in their sporting and school events and graduations. Anyone who knew him, would have to appreciate his quick witted sense of humor and kind and generous soul. He will be truly missed by all who knew and loved him. The wake will be held 3-7 PM on Tuesday January 28th at Bongarzone Funeral Home, Tinton Falls, NJ. The mass will be held at 10 AM on Wednesday January 29th at the Church of St. Anselm, Tinton Falls, NJ followed by a burial at Holy Name Cemetery, Jersey City, NJ. In lieu of flowers, memorial contributions may be made to Birthright of Red Bank, 294 Broad Street, Red Bank, New Jersey, 07701. For online condolences, please visit his memorial page at www.bongarzonefuneralhome.com

The family of Joseph F. O'Connor created this Life Tributes page to make it easy to share your memories.

Send flowers to the O'Connor family.