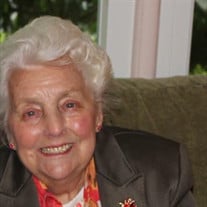 Joyce H. Roberts, 87, of Tinton Falls NJ, loving wife of Arthur L. Roberts, passed away on Friday December 4, 2015. Born in 1927 and raised in Liverpool, England, Joyce shared her life with her devoted husband, also from Liverpool. She was happily married for 64 years. In 1939, as a young girl living in Liverpool during WWII, Joyce and her sister Marjorie were separated from their parents and evacuated to Winsford, in Cheshire, to avoid heavy bombardment; while her brotherRichard served in the military. Upon returning to Liverpool, in 1947 Joyce met Arthur and together they enjoyed dancing and long bicycle rides, before getting married in 1951. They then moved to Cambridge, where they spent the next fourteen years. In 1965, as a result of Arthur’s job transfer to the United States, they set sail on the Queen Mary, along with their two daughters, Sandra and Wendy. Soon after arriving, Joyce welcomed the arrival of her two sons, Stephen and Geoffrey. Joyce and Arthur initially settled in Little Silver, NJ. They later moved to Cranford, Tinton Falls and Lincroft. During this time, Joyce was a member of the Daughters of the British Empire. She became a U.S. citizen in 1972. Joyce was an avid reader, enjoyed gardening, entertaining friends, and the company of her family. Everyone who knew Joyce knew she always enjoyed a strong cup of English tea and a good glass of wine. Joyce traveled extensively with her husband and shared many adventures with friends and family throughout Europe, the Middle East and Asia. She also shared a passion for antiques with her husband. Joyce and Arthur relocated to Venice, Florida in 1993 before returning to New Jersey in 2003 to be closer to their growing family. Joyce was predeceased by her parents Richard and Elsie Bolton and her brother Richard. Joyce is survived by her ever loving and devoted husband Arthur; her sister Marjorie and husband Wally Fraser; her brothers David and wife Sheila Bolton and Alan and wife Margaret Bolton. In addition, she is survived by her children, Sandra and husband Martin Stern; Wendy Rodriguez; Stephen and wife Kathy; Geoffrey and wife Jennifer; Grandchildren Scott and wife Nancy Margolin; Stacie and husband Jimmy Pecci; A.J., Kevin and Kristina Rodriguez; Peter Stern, Brianna and Shane Roberts; Cassandra, John and Travis Roberts, and great-grandchildren Helena Pecci, Olivia and Julia Margolin, Jadiel and Adrian Correa. Visitations will be from 2:00 pm to 4:00 pm and 7:00 pm to 9:00 pm on Tuesday December 8, 2015 at the Bongarzone Funeral Home, 2400 Shafto Road, Tinton Falls. A funeral service will be held Tuesday evening at the funeral home. Cremation and burial of cremains will be private. In lieu of flowers donations in her memory may be made to: The American Heart Association, P.O. Box 417005, Boston, MA 02241-7005 or to The Salvation Army, National Headquarters, P.O. Box 269, Alexandria, VA 22314.

The family of Joyce H Roberts created this Life Tributes page to make it easy to share your memories.

Send flowers to the Roberts family.