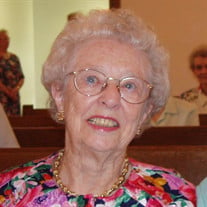 Miss Katharine S. Taylor passed in her sleep early on January 5, 2019. She was born in Chester, Pennsylvania on February 29, 1920 and grew up in Moorestown, New Jersey. She obtained a Bachelor’s degree from Albright College in Reading, PA and earned a Master’s Degree in Education from Rutgers University in New Brunswick, NJ. Ms. Taylor taught Home Economics at Roosevelt Junior High School in Westfield New Jersey for most of her 45 year career before retiring in 1987. An avid traveler and adventurous spirit, on retirement she went down the Colorado River on a rafting trip. She was an active member of the First United Methodist Church in Westfield until she relocated to Seabrook Village in May, 2001, along with her sister, Lois Stegenga. At Seabrook she was active in many activities, including the Protestant Community (Church) and the Protestant Choir and the Silvertones. Her address remained at 517 North Shore until her move to the Renaissance Gardens in the fall of 2017. She was preceded in death by her sister, Lois, and by her two brothers, Robert and Alfred. She was a beloved Aunt to her ten nieces and nephews, and is survived by nine of those ten, as well as their children and grandchildren. A Memorial Service will be held 10:30am on Saturday January 19, 2019 At the Atrium in Town Square, Seabrook Village, 3000 Essex Road, Tinton Falls, NJ. In lieu of flowers donations to the Memorial Sloan Kettering Cancer Center, 1275 York Avenue, New York, NY, 10065 would be appreciated. For online condolences please visit www.bongarzonefuneralhome.com.

Miss Katharine S. Taylor passed in her sleep early on January 5, 2019. She was born in Chester, Pennsylvania on February 29, 1920 and grew up in Moorestown, New Jersey. She obtained a Bachelor&#8217;s degree from Albright College in Reading,... View Obituary & Service Information

The family of Katharine S. Taylor created this Life Tributes page to make it easy to share your memories.

Send flowers to the Taylor family.