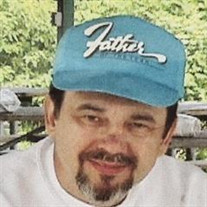 **Due to snow, Larry's memorial mass has been rescheduled to Monday, January 31 at 12:00 PM.** Larry M. Jones, 75, resident of Eatontown, NJ, has peacefully found his way to his eternal resting place on January 19th, at Jersey Shore Medical Center, Neptune. Born and raised in St. Louis, MO, he came to NJ in the 1970’s after acquiring a position at Bell Labs in Holmdel. He held a BSEE from the Southern Illinois University of Edwardsville and a MSEE from the University of Illinois. He retired in 2010 from AT&T as a Technical Professional. During his professional- working career, Larry was admired by his colleagues. He mentored and guided anyone under his supervision to become as successful as possible with the skills and knowledge he provided them from his own experiences. Larry was a wearer of many hats. He was a kind father who hated disciplining his children; a devoted husband and loving grandfather. He was the “go to person” who would be able to fix anything in need of repair. Our family and friends admired him for his intelligence. Larry was quick-witted with a dry sense of humor. Sometimes he would leave you scratching your head, or laughing with him with tears rolling down your face. He loved to freshwater fish, and birdwatch in his backyard, where he sighted female painted bunting, and was written up by the Monmouth County Audubon Society in January 2005. He also loved working on his lawn in the summer with his cigar hanging from his mouth. Larry was predeceased by his parents, Leonard C. Jones and Isabel V. Jones (Puckett); his sister, Linda Moffett. He leaves behind his wife of 38 years, Eileen E. Jones, and their three daughters; Danielle Jones Brown, and son-in-law, Chris, and grandson, Logan of Richmond, Texas; Amanda Jones Kattas, and son-in-law, Jeff, of Sayreville, NJ, and Christine Jones Hargenrader, son-in-law, Rick, and step-grandson, Ricky, of Sicklerville, NJ; a son from a previous marriage, Timothy C. Jones and daughter-in-law, Diane, and two granddaughters – Kimberly and Kara Jones, of Hazlet, NJ. He also leaves behind his two brothers, John Jones (spouse, Carole), and David Jones and his sister, Judy Jones McCallister, all in Missouri, in addition to several nieces and nephews. Larry wished to be cremated with no additional services. A memorial mass at St. Michael’s will be held on Monday, January 31, 2022 at 12 pm. Instead of flowers, donations in Larry's memory may be made to the Parkinson's Foundation at https://www.parkinson.org

**Due to snow, Larry's memorial mass has been rescheduled to Monday, January 31 at 12:00 PM.** Larry M. Jones, 75, resident of Eatontown, NJ, has peacefully found his way to his eternal resting place on January 19th, at Jersey Shore Medical... View Obituary & Service Information

The family of Larry M Jones created this Life Tributes page to make it easy to share your memories.

**Due to snow, Larry&#39;s memorial mass has been rescheduled to...

Send flowers to the Jones family.