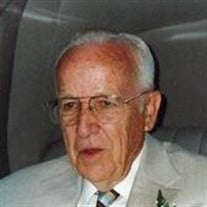 Laurence J Toole passed away peacefully on Saturday, February 27th, 2016 at the age of 101. Larry was a loving husband , father, brother, uncle, grandfather, great grandfather and friend. We all knew of his unique sense of humor and wit, coupled to his successful approach to life and family. He graduated from RPI with a degree in electrical engineering, and spent the majority of his working years with General Cable Corporation (later acquired by Pirelli) and became a senior executive manager in Bayonne NJ, and New York City while raising his family in Little Silver, NJ. Larry had many hobbies that he thoroughly perfected. His favorite was growing roses, as a member of the Jersey Shore Rose Society for many years. He won many awards, along with his wife, and became a judge for the American Rose Society. Larry who was born in Mt Vernon, OH; was married to Alfreda D Toole for over 50 years. They had two sons - John and Jim. Alfreda died in 1998, and later lost his younger son, Jim. Larry is survived by his older son, John of San Jose CA, and nephew Gerald Giannone of Connecticut. He has two grandchildren (Timothy of Albuquerque, NM; Patrick of Wellington, FLA; and three great-grandchildren. He loved his immediate family and the wonderful people they married. He attended many Catholic Churches and was an active participant. After Alfreda passed away, he moved to Seabook Village, expanding his friendships with many wonderful people. His smile, jokes, and laugh will be missed. Visitations will be held on Friday March 4, 2016 from 1:00 pm to 3:00 pm and 6:00 pm to 7:30 pm at the Bongarzone Funeral Home, 2400 Shafto Road, Tinton Falls. A funeral mass will be offered 1:00 pm on Saturday March 5, 2016 at the Auditorium in the Town Square Building, Seabrook Village, Tinton Falls. Entombment will follow at Woodbine Cemetery & Mausoleum, Oceanport. Because of his love of flowers the family will be accepting them but donations in his memory may also be made to: The Seabrook Scholars Fund or The Seabrook Catholic Community, Attn: Anne Marie Matthews, 3000 Essex Road, Tinton Falls, NJ 07753.

Laurence J Toole passed away peacefully on Saturday, February 27th, 2016 at the age of 101. Larry was a loving husband , father, brother, uncle, grandfather, great grandfather and friend. We all knew of his unique sense of humor and wit, coupled... View Obituary & Service Information

The family of Laurence J. Toole created this Life Tributes page to make it easy to share your memories.

Send flowers to the Toole family.