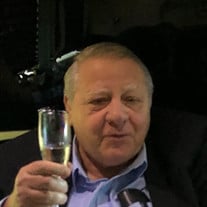 Leonidas Paraskevas Doumas, 78, of Ocean, New Jersey, passed away on January 15, 2021, after a short illness. Born in Thessaloniki, Greece on February 25, 1942, Leo immigrated to the United States with his family in 1952. Leo spent his youth working in his father’s deli in Jersey City, playing high school football, and singing in the church and school choirs. Leo graduated from Rutgers University and Seton Hall Law, eventually founding his own law firm in Bayonne. After practicing law for more than forty years and coaching multiple youth sports teams, Leo finally retired in order to spend more time with his grandchildren, rooting (often loudly) for their sports teams, particularly their hockey teams, and cheering on (again, often loudly) the Mets, Giants and Devils. Leo was an outgoing and gregarious member of his American and Greek communities, known for his stories, singing and jokes, some of which were even funny. Leo was devoted to his family, particularly his wife of 51 years, Carol, and children Alexandra and Christopher. Leo also was a devoted member of the Greek Orthodox Church, attending St. George Greek Orthodox Church in Ocean and Asbury Park, and he was both a formal advisor and informal mentor to the youth of the church. Leo also was a member of the Order of Ahepa, a member of the Freemasons, and was appointed an archon at Evangelismos Greek Orthodox Church in Jersey City. Leo is survived by his beloved wife, Carol; daughter Alexandra; son Christopher; his grandchildren, to whom he was devoted: Nikolas, Jacen, Matthias, Xander, and Calista; and his siblings and large extended family. Due to the pandemic, the family has requested a private funeral ceremony. In lieu of flowers, any memorial donations may be made to the Shriners Hospitals for Children or the St. George Greek Orthodox Church, 1033 West Park Avenue, Ocean, NJ. The family would welcome any messages, stories, pictures, or videos of Leo that you wish to download to this website and/or to [email protected] The family hopes that we will be able to gather together in better times to have a proper celebration of Leo’s life.

Leonidas Paraskevas Doumas, 78, of Ocean, New Jersey, passed away on January 15, 2021, after a short illness. Born in Thessaloniki, Greece on February 25, 1942, Leo immigrated to the United States with his family in 1952. Leo spent his youth... View Obituary & Service Information

The family of Leonidas P. Doumas created this Life Tributes page to make it easy to share your memories.

Send flowers to the Doumas family.