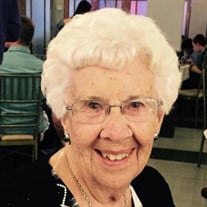 Lillian Marie Eggie, our beloved family matriarch, entered into immortality on April 15, 2020. She was surrounded by her loving family in her “Whale Haven” home on Silver Bay. Lillian led an open life of generosity, friendship, and love of family. Lillian, 93 years young, was born in Patterson, New Jersey on August 20, 1926. While growing up, Lillian’s family would summer in Keansburg where she discovered her life-long love of the ocean and the Jersey Shore. When summer began her shoes came off, not to be put back on until September every year. Lillian was the classic bare foot girl, a curious explorer of all things summer, and the master of all she surveyed: the bay, the ocean, the boardwalk, and the horse shoe crabs. Keansburg was a special place for Lillian for another reason, for it was there that she met a boy from Kearny, who was to become her future husband. Lillian graduated from Kearny High School in 1943. After graduation she attended the Washington Secretarial School. In 1948 she married the boy she met in Keansburg, James Eggie. Together they moved from place to place in Kearny and worked hard until they could afford their own home at 242 Maple St. It was there that they raised two sons and built a wonderful life together. They were married for fifty-three years. Generous and charitable, Lillian served for 30 years as the principal and president of the C.C.D./Sunday School at St. Cecelia’s Catholic church in Kearny. Lillian worked for Aetna Life Insurance in Newark for many years. She made many friends from coast to coast as her family expanded. Lillian was an amazing baker, and everyone who knew her could expect a batch of her chocolate chips for their birthday. She gave gifts for all occasions, often accompanied with one of her well worded poems. Lillian never stopped enjoying the wonders of life. She also cherished her many trips to California to see her west coast family and friends. In January she was swimming with her great-grandson in Key West. Broadway theater was also a great passion for Lillian; one that she passed down to her family. Sunday dinners on Maple St. would always end with a Broadway musical playing and everyone dancing around the dinner table. Lillian loved to drive, and she knew how navigate everywhere. Known as the “Queen of Maps,” when you got into the car heading for a destination with Lillian her first words to you would be, “do want to take a short cut? I know one.” Lillian drove until the age of 92. To her great-grandson she was known as ”Biza”. To her grandchildren, she was known as “Gram”. So, Gram, we hope you are driving with Dad on God’s highway right now and taking all the short cuts. Lillian is survived by her son James, and his wife Diana (nee Conlin) of Tinton Falls, N.J. and her son David, and his wife Carol of Long Beach, California. She had five grandchildren: James, Carlyann, Matthew, Alexandrina, and Mackenzie. She had one great-grandchild, Matthew Jr. James’s wife, Lauryn, Carlyann’s fiancé, Justin, and Matthew’s wife, Jules, were all loving parts of Lillian’s life. She was 93 years young. Travel, Broadway, reading, cooking, crocheting, mahjong, life, friends, and family were the most meaningful things in Lillian’s life. At the end of all great performances, the audience is always left wanting a little more. We want more, Gram, but we know you have new roads to drive. We love you and miss you very much. Lillian’s family looks forward to a celebration of her life with all of her friends and family in the near future.

Lillian Marie Eggie, our beloved family matriarch, entered into immortality on April 15, 2020. She was surrounded by her loving family in her &#8220;Whale Haven&#8221; home on Silver Bay. Lillian led an open life of generosity, friendship,... View Obituary & Service Information

The family of Lillian M. Eggie created this Life Tributes page to make it easy to share your memories.

Send flowers to the Eggie family.