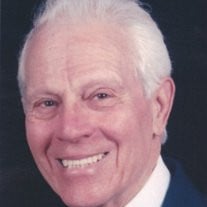 Dr. Lloyd L. Vaccarelli, 96, peacefully went to be with the Lord on August 4, 2013, at Monmouth Medical Center, Long Branch, N.J. with his family at his side. He was born on February 18, 1917, in Red Bank and spent most of his adult life in Fair Haven where he practiced dentistry for 54 years and served as school dentist for the Fair Haven schools. He was warm, outgoing, optimistic and religious and provided free dental care to many who could not afford to pay. He was also known in the greater Red Bank area as the “harmonica man,” who would provide impromptu entertainment in supermarkets and other establishments and attract and entertain children of all ages. For the last few years, he resided at Kensington Court in Tinton Falls, N.J. He most enjoyed spending time with his wife Dorothy, daughter Sandra, his granddaughter Kimberly Dalton, an accomplished singer, and his son-in-law John. While a student at Red Bank High School, from which he graduated in 1934, he competed in all major sports, receiving letters in football and basketball. In 1938, he received his bachelor’s degree at the University of Miami, where he played baseball and basketball. He continued in active competition in the same sports at the Medical College of Virginia (now Virginia Commonwealth University), where he received his D.D.S. degree. After graduation, he served from 1943 to 1946 as a lieutenant in the U.S. Navy Dental Corps, 52nd Seabees, 3rd Marines in Hawaii and Guam. He is survived by his wife of 70 years, Dorothy Steinmann Vaccarelli of Richmond, Virginia, his daughter Sandra V. D’Amico, his granddaughter Kimberly J. Dalton, and his son-in-law, retired Superior Court Judge John D’Amico. He is also survived by numerous nieces, nephews, and cousins. He was predeceased by his parents, John and Marianna Vaccarelli, his brothers Patrick, Anthony, John, and George, and his sisters Rose, Lucy and Edith. Visitation will be held on Thursday, August 8 from 5:30 to 8:30 pm at the Bongarzone Funeral Home, 2400 Shafto Road, Tinton Falls, NJ. A Funeral Mass will be offered at St. Anthony of Padua Roman Catholic Church, Red Bank, on Friday August 9, at 10:30 AM. The family has requested that everyone go directly to church on Friday, there will be no visitation prior to mass. Entombment will follow at the Woodbine Cemetery & Mausoleum in Oceanport.

Dr. Lloyd L. Vaccarelli, 96, peacefully went to be with the Lord on August 4, 2013, at Monmouth Medical Center, Long Branch, N.J. with his family at his side. He was born on February 18, 1917, in Red Bank and spent most of his adult life in... View Obituary & Service Information

The family of Dr. Lloyd L. Vaccarelli created this Life Tributes page to make it easy to share your memories.

Dr. Lloyd L. Vaccarelli, 96, peacefully went to be with the Lord...

Send flowers to the Vaccarelli family.