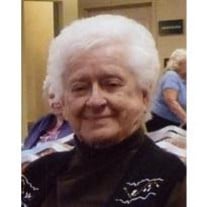 Margaret (Marge) Ruth Samuelsen, 88, of Tinton Falls; passed away Friday, December 31, 2010. She was born to the late John and Mary Tengi, July 17, 1922, in Garfield, NJ. and was one of 12 children. Margaret graduated from Garfield High School. She was first married to the late Andrew (Andy) Sekanics who gave his life for our country during World War II. She was married to the late Ernest (Ernie) Samuelsen for 59 years and they lived together in Garfield, Parlin, Wayne and Cherry Hill, NJ; and Pittsburgh, PA. and raised three children, Carolyn, Cliff and Bonnie. Her retirement years were spent in Loveladies, NJ and Fort Myers, FL. Marge was gifted with abundant love and shared it freely with everyone she knew. Her family, both immediate and extended, were her life and her joy. She became affectionately known as the matriarch and grande dame of her large family and was known for hosting many family reunions. Margaret was an Executive Administrative Assistant at RCA, Moorestown, NJ; and worked on the Aegis program for the U.S. military which included high level security projects for eleven years until she retired in 1981. She always enjoyed working, and was a very devoted and respected employee. Margaret enjoyed and played many sports, including tennis, golf and bowling. She and her late husband, Ernest, enjoyed ballroom dancing and traveling. The last 21 months Margaret resided at Seabrook Village, Renaissance Gardens Assisted Living facility. During this period of being challenged with Alzheimer's she continued her ability to express and share her great love and compassion to others including fellow residents, staff and most of all, to her family. Margaret was also predeceased by her six brothers, and four sisters, and is survived by one brother, Frank Tengi. She is also survived by daughter Carolyn Marie Heindel and her husband John of Virginia; daughter Bonnie Ann Samuelsen of Florida; and son Clifford Joseph Samuelsen and his wife Ellen of New Jersey. Six years ago she acquired two lovely granddaughters, Lisa and Laura of Philadelphia, PA.

Margaret (Marge) Ruth Samuelsen, 88, of Tinton Falls; passed away Friday, December 31, 2010. She was born to the late John and Mary Tengi, July 17, 1922, in Garfield, NJ. and was one of 12 children. Margaret graduated from Garfield High School.... View Obituary & Service Information

The family of Margaret (Marge) Ruth Samuelsen created this Life Tributes page to make it easy to share your memories.

Send flowers to the Samuelsen family.