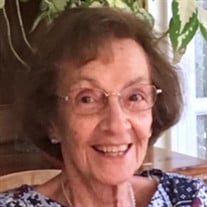 Margaret B. Glensor, 87, beloved mother and grandmother, passed away on April 22, 2020, surrounded by her loved ones in Tinton Falls. Peggy was born in Staten Island on September 1, 1932. She was raised in Staten Island by the late Gretchen and William Barry and survived by her brother Ed Barry and attended St. Peters Girls High School. After high school she worked in New York City at Young and Rubicam. She met her husband while commuting on the back of the Staten Island Ferry. Peggy was predeceased by her husband Ronald Glensor of 56 years and her son William Glensor. She is survived by daughter and son-in-law, Pat and Ken Semon of Arkansas, daughter-in-law, Katie Glensor of Maryland, son and daughter-in-law, Charlie and Vera Glensor of Hazlet, NJ, and daughter and son-in-law, Barbara and Martin Schall of Tinton Falls, NJ. She is also survived by her twelve grandchildren, Heather, Mary, Kenneth, Eric, Kirsten, Matthew, Timothy, Allison, Jordan, Jacob, Nicholas, Jason, and great granddaughter Jade Semon. Peggy and her husband Ronald enjoyed sailing and travelling all over the world together. She was an active member of St. Clare’s Church, Mothers’ Club activities, and ran the CCD program for many years. Additionally, she was a member of the Staten Island Yarnetts where she crocheted blankets for nursing homes, and volunteered in schools to help students with special needs. Peggy enjoyed summers at the Richmond County Yacht Club enjoying weekends sailing, and was a member of the Great Kills Swim Club spending summers with her children and friends reading books and playing card games. Finally, Peggy was happiest spending time with her twelve grandchildren at the Jersey shore especially Stone Harbor. A memorial mass will be held at a later date, as Margaret will be laid to rest with her husband Ronald at Resurrection Cemetery in Staten Island.

Margaret B. Glensor, 87, beloved mother and grandmother, passed away on April 22, 2020, surrounded by her loved ones in Tinton Falls. Peggy was born in Staten Island on September 1, 1932. She was raised in Staten Island by the late Gretchen... View Obituary & Service Information

The family of Margaret B Glensor created this Life Tributes page to make it easy to share your memories.

Send flowers to the Glensor family.