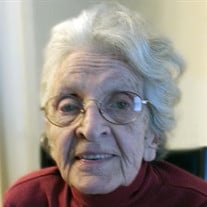 Marion K. Sims (1919-2018) Marion Kruger Sims was born in Bernardsville, NJ in 1919, the second child of Rose and Oscar Kruger. She graduated in 1939 with an Associates Degree in Advertising and Industrial Design from the Newark School of Fine and Industrial Art, and began working as a commercial artist in illustration and layout. An accomplished musician, she also, during this time, played the French horn in the Newark Symphony, and later in life, the flute. During WWII she enlisted in the Women’s Army Corps and served as a draftswoman in London in a top secret drafting department with the Supreme Headquarters, Allied Forces Europe of the Signal Corps, where she worked on plans for the D-Day Invasion. During the invasion of France, Marion landed with her unit on Utah Beach in Normandy, and later moved on to Paris and Frankfort as part of the Liberation Forces – for these moves she received two battle stars, and in 2000 was awarded a French Medal of Honor for her wartime service. While in London, Marion met her future husband, Edward J. Sims, a paratrooper in the 82nd Airborne Division 504 PID (Parachute Infantry Division) from Hamilton, OH. They married after the war ended and Marion joined him on tours of duty throughout the South and in Germany during the American Occupation after the war. At this time she resumed her art career in illustration and created a number of meticulous, finely detailed paintings as well as many watercolor portraits, oil paintings and landscapes. Marion and her family returned from Europe and settled down to live in Bernardsville. She was an accomplished fine artist and became an award-winning abstract watercolorist who was a lifetime member of the New Jersey Watercolor Society. Marion explored printmaking in the 60s and 70s and created numerous etchings and silkscreens as a member of the New York Graphics Workshop. During her time in New York City she also began to associate with artists of the theater avant-garde and participated in various non-traditional performances. Associating with people such as Robert Wilson and Andy Warhol, she played parts in early theatrical pieces, and later staged her own solo ‘agitprop’ performances at various locations, which criticized existing art and political establishment issues. In the late 80s she began to recycle some of her older watercolor paintings and used them to compose new large-scale 3-D paper collages. During the 90s she became fascinated with computer-generated painting programs. Until the end of her life, she created numerous color field digital paintings that simulated watercolor brushstrokes and color blending in remarkable likeness to her original painting style. Marion and Edward Sims retired to Seabrook Village, Tinton Falls, NJ in 2004. Eddie passed away in 2013 and is interred in Arlington National Cemetery. Marion died on September 9, 2018 after a very long, interesting, creative life. Interment will be, with honor for her status as a WWII WAC Veteran, with her husband in Arlington National Cemetery - services at 10 AM on May 1, 2019 at Arlington National Cemetery. She is survived by her immediate family, Tina and Scott Nowlin in Colorado – EJay Sims and Ken Kobland in New York City, step-granddaughter Jennifer Harrow, her nieces and nephew and great nieces and nephews in the Kruger family, and special family member for over 50 years, Barbara (Willie) Kissinger. Marion will be honored with a military funeral in Arlington National Cemetery, Arlington, VA on May 1, 2019 at 10 AM -- and interred with her husband, Col. Edward J. Sims in the gravesite: Section 55, Grave 4507. Donations in her name can be made to: Women In Military Service For America Memorial: Women's Memorial Foundation, PO Box 420560, Washington, DC 20042-0560 or Operation Courage is Beautiful: (donate for care packages for women service members) OCIB, 9921 Carmel Mountain Road, San Diego, CA 92129 To see some of Marion's creative works, please visit www.mksims.com

Marion K. Sims (1919-2018) Marion Kruger Sims was born in Bernardsville, NJ in 1919, the second child of Rose and Oscar Kruger. She graduated in 1939 with an Associates Degree in Advertising and Industrial Design from the Newark School... View Obituary & Service Information

The family of Marion K Sims created this Life Tributes page to make it easy to share your memories.

Marion Kruger Sims was born in...

Send flowers to the Sims family.