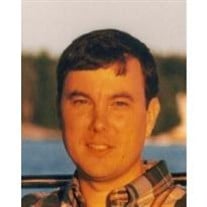 Mark R. Holder, 54, of Shrewsbury, peacefully entered Heaven on November 3 after a lengthy and heroic battle with ALS (Lou Gehrig’s Disease). Mark was born in Syracuse, NY. on October 27 1956 to Charles (Smitty) and Margaret (Madge) Holder. He was a loving and generous son, brother, friend, husband, father and co-worker. He will be grievously and sorely missed. Mark graduated from CBA High School in Syracuse, NY, in 1974. He graduated in 1978 from SUNY Oswego with a BS degree in Computer Science, and in 1999 from Monmouth University in Long Branch, NJ, with an MS degree in Software Engineering. Mark’s successful career spanned 31 years. He began his career in Boston, where he was first employed by the Raytheon Corporation. Later, he became a Site Manager for the Mitre Corporation, also of Boston. It was during this phase of his career that he met his wife, Teri, and they were married. He then accepted a job as Deputy Program Manager for the Sensis Corporation of Syracuse, and later, as Program Manager for the CSC Corporation in NJ, where he was awarded the CSC Presidents’ Award. Mark then moved to the Vitronics Corporation, where he served as Vice President and Chief Technical Officer. It was there that he and a co-worker invented the ParaScope™ Urban Combat Scope, for which they were eventually awarded a hard-earned and much-coveted patent. An entrepreneur and inventor at heart, this patent was the realization of a lifelong dream, and brought Mark much joy during the last year of his life. After Vitronics was purchased by MTC Technologies, Mark was awarded the CECOM Quality Team Award for Excellent Service. His final employer was the BAE Systems Corporation, for whom he served as a Technical Director. Mark continued to work right up to within three months of his passing, and his determination to be the sole provider for his family, in spite of his ongoing illness, was a stunning display of courage and of his undying love for them. He was and will remain a hero. Mark loved his job, but what meant the most to him were his God and his family. He poured himself out for them and his children were and are his most cherished legacy. Mark was predeceased by his parents. Surviving are his wife of 23 years, Teresa (Teri) Kohlbrenner-Holder; his children: Benjamin, Kimberly and Jessica; his sister Ann Holder-Braden; and many nieces, nephews, in-laws and friends. He loved them all. A private burial will take place in Syracuse. NY. at a later date.

The family of Mark R. Holder created this Life Tributes page to make it easy to share your memories.

Send flowers to the Holder family.