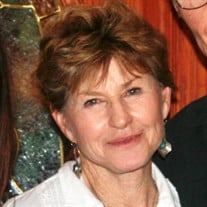 Mary Theresa Helgans died Friday February 22, 2019 in her sleep due to a complication related to her 2012 stroke, at her residence at Seabrook Village, Tinton Falls, NJ. She was born in Manhattan, NY on May 11, 1940 and raised in Staten Island, the second child of John and Kathleen Doherty. Her father advised his children that they either go to college or work for the city. Her brothers entered the New York City Sanitation and Fire Departments and Mary was the first in her family to extend her schooling. She earned a teaching degree as a scholarship student at City College of New York, graduating in 1961. She studied physical and health education. She married Robert E. Helgans Jr on January 21, 1961 and followed him to Virginia for completion of his ROTC Army commitment. Their first child was born at Fort Belvoir. They returned north to raise a family in Chester, NJ. While Robert worked at Bell Laboratories, Mary was a homemaker and part-time aerobics, swim, and gymnastics instructor until her teaching career in Chester Township schools began in 1971. She retired in 1999, collecting a masters in education and (at 50) registered nursing degrees along the way. During the summers she taught youth and adult American Red Cross Water Safety. Her enthusiasm for adventure was evidenced in her initiation of family camping trips, skiing, and bicycling activities. She will be fondly recalled as a person with exuberance for life, with generosity to excess, and with an innate ability to find the beauty in most any person she encountered. She is survived by her husband Robert, brothers John J., James P. and Thomas F. Doherty, her children Veronica Helgans (Gregory Turner), Mary Frances Shaw (Michael Shaw), and Robert E. Helgans III (Elizabeth Helgans) and grandchildren Graham and Isabel Turner, Josephine and Thomas Shaw, and Delaney, Charlotte, and Jasper Helgans. Her life will be celebrated at an as yet undetermined date, but condolences may be expressed on her memorial page at www.bongarzonefuneralhome.com , and, in lieu of flowers, donations may be sent to Wounded Warrior Family Support.

Mary Theresa Helgans died Friday February 22, 2019 in her sleep due to a complication related to her 2012 stroke, at her residence at Seabrook Village, Tinton Falls, NJ. She was born in Manhattan, NY on May 11, 1940 and raised in Staten Island,... View Obituary & Service Information

The family of Mary T. Helgans created this Life Tributes page to make it easy to share your memories.

Send flowers to the Helgans family.