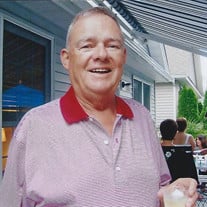 Michael Emmett Barrett, 78, of Ocean Township, NJ passed away from complications of cancer treatment on Thursday, December 7, 2017 at Sloan Kettering Hospital in New York City. He leaves behind his true love and wife of 55 years, Anne Marie (Tierney) Barrett and their three children: Genevieve Gallagher and her husband Michael, Denise Pantason and her husband Andrew, and Charles Barrett and his wife Lieu. He is also survived by his seven grandchildren and his brother, Kevin Barrett. Michael was born on October 28, 1939 to Irish immigrants Michael and Margaret McMahon Barrett in the Bronx, NY. He attended St. Nicholas of Tolentine High School where he met his wife, Anne Marie Tierney. Following high school, Michael served in the army for two years as a military police officer in Garmisch, Germany. Michael believed in the merits of a good education and took classes at Manhattan College while working and starting a family. He was unable to complete his degree at that time but returned to his studies at Farleigh Dickenson University and graduated in 1985, three months before his oldest daughter. Michael’s career as an Executive Vice President in mortgage financing spanned many decades at Household Finance in NY, Crestmont Federal Savings in Westfield, NJ, and Ocean Federal in Toms River, NJ. He was the “go-to” guy for mortgages, always spending time with his children’s friends to coach them through the process. Michael was given a plaque in his honor at his retirement with his name and the quotes “no problem” and “piece of cake” because those were his responses to any situation that was presented to him. Michael loved his family and spending time with friends. He played basketball in his younger years and coached all of his children when they were younger. During his retirement, he spent many hours on the golf course and he loved the beach, especially the sunsets in Bonita Springs, Florida. Many would describe Michael as a great guy, funny, gregarious, and loud. He was all of those things but he was also kind, gentle, and generous with his time, knowledge, and spirit. He was a loving husband and a wonderful father and grandfather! He will always be our Superman! Visitation will be held from 4 to 8 PM on Sunday, December 10 at Bongarzone Funeral Home, Tinton Falls, NJ. Funeral mass will be offered at 11 AM on Monday, December 11 at St. Anselm’s RC Church, Tinton Falls, NJ. In lieu of flowers, memorial donations may be made to the American Cancer Society at donate.cancer.org

The family of Michael E. Barrett created this Life Tributes page to make it easy to share your memories.

Send flowers to the Barrett family.