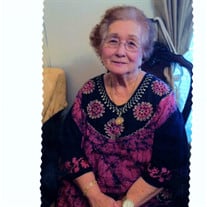 Milagros “Mamang” Schwarzkopf ,81, passed peacefully surrounded by her family at Jersey Shore Rehabilitation Center, Eatontown. Mamang a native of the Philippines relocated to the United States in 1995 where she resided with her daughter Rosario Conde, son-in-law Nestor and her loving grandchildren Michelle, Jennifer, Jennilyn, Leilani, Alvin and EJ Conde of Tinton Falls. Mamang’s love of both her native country and her new home the United States was evident; she was always up to date on the political information. Mamang, could always be found in the favorite room of the house the kitchen, where the meals were always extra special as the main ingredient was love. A woman of great strength, generosity and faith, who was always ready to take care of the needs of someone else before taking care of herself. Mamang was a Mother, friend, confident, “secret keeper”, special angel who walked among all of us. To those who met her she immediately became “Mamang” and you were welcomed into the fold of her love which new no boundaries. As a woman of who had great faith, and when things went wrong she always looked to scripture to guide her as to what to do. Her faith never faltered even in the bleakest of times it remained steadfast. Mamang was a faithful communicant of St Anselms Church in Wayside. She is survived by her children Anthony Schwarzkopf, Vincent Schwarzkopf, Rosario Conde, Richard Schwarzkopf, Jessica Cabulao, and Jessie Schwarzkopf. Visitation will be held on Thursday August 21, 2014 from 7 pm - 9 pm and Saturday August 23, 2014 from 5 pm – 9 pm at the Bongarzone Funeral Home, 2400 Shafto Road, Tinton Falls. Burial will take place in the Philippines.

Milagros &#8220;Mamang&#8221; Schwarzkopf ,81, passed peacefully surrounded by her family at Jersey Shore Rehabilitation Center, Eatontown. Mamang a native of the Philippines relocated to the United States in 1995 where she resided with her... View Obituary & Service Information

The family of Milagros W Schwarzkopf created this Life Tributes page to make it easy to share your memories.

Send flowers to the Schwarzkopf family.