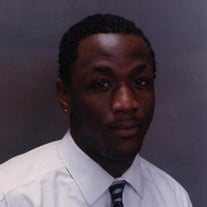 On Saturday January 1st 2022, God gave Mykal his heavenly wings and escorted him home to be with him. Mykal Anthony McKay, son of Francis H McKay Jr. MD and Vivian McKay, was born at St. Peters University Hospital in New Brunswick NJ on January 19th 1983. He attended school at Brookside School in Sea Girt, Valley Forge Military Academy in Pa and ultimately graduated from Monmouth Regional High School in 2001. He went on to DeVry Institute to study computer engineering but he always had a love for cooking and music and left to pursue those interests. He then went on manage bread and circus catering for several years in New York City where he was thriving until COVID-19 struck the world and then he pursued other work. In his spare time, he did some modeling and singing on the side as he always had a passion for artistic endeavors. Mykal AKA BLK Prince to his many Facebook followers is known for his sense of humor, his big heart and the unconditional and endless love for his two children Jeremiah and London. We can all still hear him saying his classic catchphrases “for real” “are you serious” and “$tretchedbutnotbroken.” Although the time they spent together was brief Mykal was so excited for his nephew Weston and would tell everyone how he planned to spoil him. Everyone who knew him knew how he could make anyone love him and it was impossible to stay mad at him. Mykal has always been very spiritual and would go to church often, he remained close to the church leaders and often looked to them for guidance. Mykal would give a helping hand where ever needed. He will be missed by all especially his grandmother Johnnie Mae Ayler who he would spend many nights acting as her caretaker. His kind, patient and gentle nature would always put her and those around him at ease. Mykal was predeceased by his father Francis H McKay Jr MD and grandparents Francis H. McKay Sr., Lenora Walker McKay and R E Ayler. He leaves behind to cherish his memory his children Jeremiah Lee and London McKay. His mother Vivian McKay. His sister Ondrea McKay Coshburn MD, brother-in-law and nephew William Coshburn and Weston Coshburn. His grandmother Johnnie Mae Ayler. Several aunts and uncles Edna Ayler (David Richardson), Susan Ayler (Michael Newborn), Sylvia Ayler (Barry Porterfield), Regina Ayler (Kenneth Hardin), Frances Nunn, Peggy Laister, Michael Ayler (Maryann Gordon), Earl Ayler, Wayne Laister (Vinnie), William Laister, his very special friend Jennifer Schwartz and a host of cousins and dear friends. Lovingly Submitted, The Family Visitation will be held starting at 10 AM with a service at 12 PM on Saturday, January 8 at Bongarzone Funeral Home, 2400 Shafto Road, Tinton Falls, NJ. Due to health concerns and at the family's request, please wear a mask while attending. Interment will follow at Monmouth Memorial Park, Tinton Falls, NJ. For online condolences, please visit Mykal's memorial page at www.bongarzonefuneralhome.com

The family of Mykal Anthony McKay created this Life Tributes page to make it easy to share your memories.

Send flowers to the McKay family.