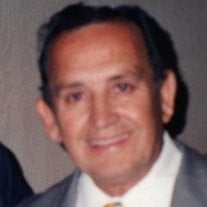 Nick Poulos, 83, of Monmouth Beach died comfortably at home holding the hand of the love of his life Domna and surrounded by family members on Tuesday, September 24, 2013. Nick was born on October 24, 1929, in Piraeus, Greece, to parents Ioannis and Anna Spiropoulos. He had four siblings, sister, Maria and three brothers Anastasios, Ioannis and Evangelios. After serving in the Greek Navy from 1947-1950, Nick Poulos left his beloved homeland to come to America to find his destiny. In America Nick found the love of his life Domna (1955) and they were married at St. George Greek Orthodox Church in Asbury Park, New Jersey in 1957. The couple would have three children, Anna (deceased), Kasandra Poulos Moutis (married to George) and John Poulos (married to Laurie). In America Nick became a successful business owner, heading up a construction company from 1958 until his retirement in 2000. During these years, he built his business into a construction empire, while helping to teach many younger men along the way. His ability to touch the lives of many is well remembered. All those who knew Nick understood that he held the Church in the highest regard and with great respect. He became an early member of Leadership 100 and in 1987 Nick was made an Archon of St. Andrew the Apostle, the highest honor bestowed on a layperson in the Greek Orthodox Church, for outstanding service and devotion to the Church. Keeping his beloved St. George Greek Orthodox Church very close to his heart, he was a strong voice in the growth and life of the church. Nick held various positions on the Parish Council, while serving over 40 years consecutively. Nick was an active member of the AHEPA. He was the fundraising chairman of the St. George Building Fund for many years. He was instrumental in fundraising, negotiating and purchasing the 6.5-acre site on which now sits the new St. George Greek Orthodox Church in Ocean, New Jersey. Nick and Domna Poulos were blessed with many grandchildren; Victoria Moutis (married to John Michals), Nicole Moutis, Dana Moutis, Nicolas Poulos and Ethan Poulos. ‘Papou Niko’ will always be remembered as a symbol of strength and comfort to them and all those who knew him. Nick will forever leave as his legacy the memory of his strength, generosity and loving ways in the hearts of his family, especially his wife, Domna. A giant among men, Nick Poulos was a lover of mankind, his church and his family. He is remembered as a man who never turned away from challenges, recognizing his destiny lay in a journey that would take him to riches that man cannot find on earth. Visitation will be on Friday September 27, 2013 from 6-9pm at St. George Greek Orthodox Church, West Park Ave., Ocean, N.J. Funeral service will be held on Saturday, September 28, 2013 at 9am at St. George Greek Orthodox Church. Burial to follow at St. George Cemetery. In lieu of flowers, donations may be made to St. George Greek Orthodox Church in Memory of Nick Poulos. For online condolences, please visit Nick’s memorial website at www.bongarzonefuneralhome.com

Nick Poulos, 83, of Monmouth Beach died comfortably at home holding the hand of the love of his life Domna and surrounded by family members on Tuesday, September 24, 2013. Nick was born on October 24, 1929, in Piraeus, Greece, to parents Ioannis... View Obituary & Service Information

The family of Nick Poulos created this Life Tributes page to make it easy to share your memories.

Send flowers to the Poulos family.