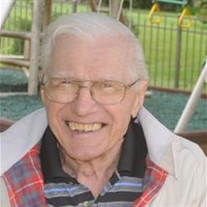 OTTAVIO SUMBERAZ, 95, of Seabrook Village, TINTON FALLS Ottavio “Artie” Sumberaz, 95, of Seabrook Village, TINTON FALLS, passed peacefully from this life on Sunday, July 30. Born April 14, 1922 in Sumber, Italy, he came to the United States as a young man in 1948, with only a fifth grade education and very little money. He worked in New York City, initially as a waiter and ultimately as a wine steward at high end restaurants like the 21 Club. He met his wife Ann (nee Lizzul), through mutual friends. They spent 56 happy years together and raised two children, Diann and Danny. They retired to Florida in 1984 from where they spent 18 wonderful years traveling the world, spending quality time with family and friends and enjoying their “golden years”. They moved to New Jersey in 2002, when his wife became ill. Since her death in 2007, he has continued to live life to the fullest. Among his favorite pastimes was playing golf, which he continued until 2014. He also played cards regularly with friends at Seabrook Village until his death. He enjoyed watching soccer, golf and baseball on TV. He was always quick with a smile and had a great sense of humor. He was a devoted husband, father, grandfather and great grandfather. He will be deeply missed, but has left behind countless wonderful memories. He was predeceased by his wife, and his son. He is survived by his daughter, Diann Turner and her husband, Dennis, of Pennsylvania, his daughter-in-law, Laurie Sumberaz of Hawaii; his grandchildren, Brianne and Andrew Verrinder, of New Jersey; Graig McConnell and Kelly Raynor of Maryland; Michael and Angelica McConnell of New Jersey. Sixteen years ago, through the marriage of his daughter, he gained two new grandchildren: Chris and Sarah Turner of Texas and Jay and Ashleigh Turner of Arizona; his great grandchildren include Lily, Bella, Anthony, Chloe and Mia. He is also survived by two special friends from Seabrook, Cynthia Elhilow and Eve McCallum. Visitation and a short memorial service will be from 2 to 4 p.m. on Friday at the Bongarzone Funeral Home, 2400 Shafto Road, Tinton Falls. In lieu of flowers, the family would encourage contributions to: Seabrook Student Scholarship Fund (in memory of Ottavio Sumberaz) ATTN: Ann Marie Matthews, 3004 Essex Avenue, Tinton Falls, NJ 07753. OTTAVIO SUMBERAZ, 95, of Seabrook Village, TINTON FALLS

The family of Ottavio Artie Sumberaz created this Life Tributes page to make it easy to share your memories.

Send flowers to the Sumberaz family.