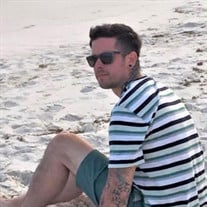 Paul De Angelo, 34, of Rocky Point NC, formerly of Tinton Falls NJ, passed away suddenly on Tuesday, May 11, 2021. Paul grew up in Tinton Falls – attended Tinton Falls public schools, graduated Christian Brothers Academy in Lincroft and attended Hartford University. He served his community as a volunteer Fire Fighter of Tinton Falls Fire Company No. 1. Moved to Asheville, North Carolina where he worked in a Sober Living Home helping addicted young men. This lead to his involvement in NCCYPAA – a North Carolina organization for furthering the principles of AA among young people in North Carolina. He later moved to Wilmington NC where he started his own company – A New Leaf Tree Service – employing recovering addicts. In his last few months he developed a passion for wood-working at Making Whole. Growing up Paul was a member of the local Cub Scout Pack 128 and participated in local town sports. From an early age he enjoyed paintball – and was later a member of a semi-professional team. He also enjoyed fishing which was first introduced to him by his grandfather. Paul learned to play the drums in grammar school and as his enjoyment grew so did his drum set. He also enjoyed downhill skiing in the mountains of the Northeast and found great pleasure spending time on the beach down the Jersey Shore. He especially enjoyed spending time with his friends. As he grew he developed a soft spot for animals and had 6 cats living with him. Paul was predeceased by his grandparents Carmen and Sabina De Angelo and Alexander and Bertha Butchko and his cousin Deborah De Angelo. He is survived by his parents Don and Kathy De Angelo, his sister Natalie De Angelo, his great-aunt Anna Kleckner, his uncle Robert De Angelo and his wife Deborah and their son Michael, his aunt Anne Mawson and her husband Robert and their son Christopher and his wife Katie, and many other cousins and good friends. Visitation will be held 2:00 to 5:00 PM on Tuesday, May 18 at Bongarzone Funeral Home, 2400 Shafto Road, Tinton Falls, NJ 07712. Funeral mass will be offered at 10:15 AM on Wednesday, May 19 at the Church of St. Leo the Great, 50 Hurleys Lane, Lincroft, NJ 07738. Interment will follow at Holy Cross Cemetery, North Arlington, NJ. The family is requesting no flowers, but donations may be made tο: Making Whole, 22 South Oak Forest Drive, Asheville, NC 28803 thru the mail – visit at http://makingwhole.com/ for more information about the program. **Due to limited capacity, we ask that you keep your visit brief so that all guests will be able to offer their condolences. The State of New Jersey requires that masks must be worn on the nose and mouth inside the funeral home and church at all times. Thank you for your kindness during this difficult time.**

The family of Paul De Angelo created this Life Tributes page to make it easy to share your memories.