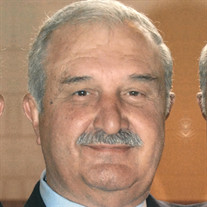 Peter Kanellas, 80, of Oakhurst, NJ passed away on Friday, December 20, 2019 at Jersey Shore University Medical Center with his loving family by his side. Peter Kanellas was born in Chios, Greece, on March 6th 1939. He was the son of Panagioti Kanellas and Cleopatra Stroumbakis. Peter arrived in America at the age of 13, lived in New York City for a short period of time and then he settled in Asbury Park, NJ. Later that year (in the 1950’s) he went to school and at the same time joined St. George Greek Orthodox Church of Asbury Park. After graduating from Asbury Park High School, he pursued a career in Heating & Air Conditioning by enrolling in Lincoln Technical School. Upon completion after very successfully earning a degree, he started his own business and became President of Neptune Air Conditioning & Refr. in Bradley Beach, NJ. Peter met and married Eleni Milonas, May 6, 1962. Peter and Eleni have two daughters Cleopatra and Theodora. Their family has since grown with the addition of their son in law Stavros and granddaughters Eleni and Angela Giamos. Peter became an active board member of St. George in 1977. In 1983-1984, he became Vice President and then was elected President in 1990-1992 of the Church Parish Board. His dedication and love led him to donate his time and generosity to the Church and to join other organizations affiliated with our Church such as AHEPA, in which he was Vice President and The Cemetery Committee. He also was the representative from New Jersey for the Tholopotami Benevolent Society. In 1991, Peter was approached by the Mayor of Ocean Township, Mayor Weldon, in regards to moving the Church to its current location in his hometown of Ocean Township, NJ. At that time Peter met with the founding fathers on separate occasions to get this major goal off the ground. He approached the Parish Counsel and made a motion to have approval to negotiate the purchase of the land. Along with other parishioners, he worked for a common dream. After obtaining unanimous consent, their dream began. He loved his wife Eleni, his daughters, Cleopatra and Theodora, his son in law, Stavros, and his granddaughters, Eleni and Angela. Peter also loved his friends, church, traveling, history, politics, reading, and walking down by the beach. Peter was modest, humble, and at the same time generous, honest and sincere. He was truly altruistic. Visitation: Sunday, December 22, 2019 5pm- 8pm Bongarzone Funeral Home 2400 Shafto Rd, Tinton Falls, NJ www.bongarzonefuneralhome.com Funeral Service: Monday, December 23, 2019 11am St. George Greek Orthodox Church 1033 West Park Ave. Ocean Twp. NJ 07712 In lieu of flowers contributions can be made to American Cancer Society: http://www.cancer.org/ or St. George Greek Orthodox Church. 1033 West Park Ave. Ocean, NJ 07712

Peter Kanellas, 80, of Oakhurst, NJ passed away on Friday, December 20, 2019 at Jersey Shore University Medical Center with his loving family by his side. Peter Kanellas was born in Chios, Greece, on March 6th 1939. He was the son of Panagioti... View Obituary & Service Information

The family of Peter Kanellas created this Life Tributes page to make it easy to share your memories.

Peter Kanellas, 80, of Oakhurst, NJ passed away on Friday, December...