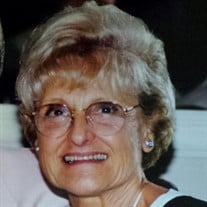 Phyllis L. Vitacco, 92, of Jackson Township, NJ, passed away on Tuesday February 1, 2022, at the Bartley Healthcare Nursing and Rehab Center, Jackson Township. She was born in New York City and raised in Brooklyn, NY. Phyllis settled in Red Bank, NJ in 1953 and has been a resident of the shore area for over 50 years. She worked in retail sales her entire career, as the owner of Peridot Dress Shop in Red Bank and later for Talbots in Shrewsbury. She loved singing, dancing, and listening to Frank Sinatra. Phyllis was a die-hard New York Mets fan, and her favorite holiday was Christmas Eve. She was predeceased by her beloved husband Patrick S. Vitacco in 1981, her parents Antonio Leanza and Rosina D’Angelo, her brothers Joseph Leanza and Frank Leanza, her sister Nancy Leanza Dizek. Phyllis is survived by her loving daughters; Janice Corradino (Charlie) and Patrice Vitacco, her cherished grandchildren; Jena-Marie and Brian Boresen, Stephanie and Joseph Fiorella, Meredith and Tyler Otero, Robbie and Sarah Zimmermann, Kristin Zimmermann and Rich Woll, Holly Zimmermann and Chris Panagos. She is also survived by her great grandchildren; Tyler, Trevor and Avery Boresen, Jordyn and Danica Fiorella, Charlie and Sienna Otero, Austin, Logan and Amelia Zimmermann, Freya Barrett, and Leyna Woll. All services including Interment at Mount Olivet Cemetery, Middletown are private. The family has requested donations in her memory be made to the charity of your choice. For online condolences and to share a memory please visit her memorial website at www.bongarzonefuneralhome.com.

The family of Phyllis L Vitacco created this Life Tributes page to make it easy to share your memories.

Send flowers to the Vitacco family.