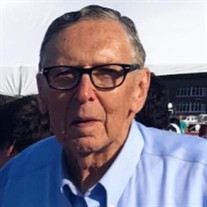 THURSDAY'S VISITATION AND FRIDAY'S FUNERAL MASS HAVE BEEN CANCELED. The family would like to thank everyone for their sympathy and understanding in this difficult time. Richard Martel, 85, of Oceanport, passed away peacefully at his home surrounded by his family on February 10. Richard and his late wife, Bonnie Gillespie Martel, were residents of Oceanport for over 55 years. Richard and Bonnie are survived by their four children, Richard Jr., Christopher, Stephanie, and Olivia. Also by their daughter-in-laws, Carlene Martel and Mary Martel, as well as their son-in-law, Christopher Giberson. Richard was also survived by his two sisters, Lorraine Therrien and Arlene Bouchard. Richard has three beautiful grandchildren, Ellie, Grace, and Martel, as well as many nieces and nephews. Incredibly smart and a bit quirky. Eager to solve problems, weighing each option carefully as he went. Amused by his own good fortune. Overall, Richard had a slow and steady approach to life. His persistence and dedication to live simply and live with honor is evident in the vast array of people whose life he touched along the way. He loved his wife and his family more than anything and was always eager to share proud stories about them with whomever would listen. Richard had a sharp mind and could often be found using his intellect to help people. In fact, when he was only ten-years-old, back in his hometown of West Springfield, Massachusetts, Richard had a special knack for fixing broken radios. And by the time he was only twelve, he would graduate to fixing the neighborhood’s TVs. He had the patience to read any kind of instruction manual and then the enthusiasm to explain it back to you, step-by-step. Richard attended UMASS-Amherst and due to ROTC, was sent to Fort Monmouth to formally join the Army the very day he graduated from college. His time served was dedicated to helping make sure the telecommunications portion of that branch’s operations ran smoothly. The way he described it to his kids in later years, it sort of sounded like he was a top secret agent! Who knows if that was the case but it always sounded exciting. Either way, his efforts were important to him and to the service. As an electrical engineer, he was involved in such cutting edge projects as the first breathalyzer and the first speed radar gun. Later in his career, he became heavily involved in construction, actually overseeing a multi-million dollar expansion at CentraState Medical Center. A bit shy and reserved, Richard was fine with taking the lead when it came to technical matters and quietly reveled in doing so. This could be at his place of employment, when he would volunteer building houses with Habitat for Humanity, or at his own properties. A voracious reader and an introvert at heart, he knew his strengths and he was content with them. He loved simple pleasures like the roar of a corvette, the sweetness of a black and white milkshake, and jazz or classical music (his two favorites) as they played in each room of his house. He loved going on boat rides, especially when it meant seeing fireworks together. And he always loved flying his little plane. Whether it was his family, a neighbor, a co-worker, or someone he had just met, Richard was always focused on giving back. It just came naturally to him to try to be of service to those around him and to provide any sort of help that he could. We love you, Dad. Rest in peace. Visitation will be Thursday, February 18th from 4-7pm at Bongarzone Funeral Home, Tinton Falls. In lieu of flowers, the family asks that you please consider giving to St. Jude’s Children’s Hospital or Children’s Hospital of Philadelphia in Richard’s honor as those were the two charities closest to his heart. For directions and online condolences, please visit Richard’s memorial page at www.bongarzonefuneralhome.com **Due to limited capacity, we ask that you keep your visit brief so that all guests will be able to offer their condolences. Masks must be worn on the nose and mouth inside the funeral home at all times. Thank you for your kindness during this difficult time.**

THURSDAY'S VISITATION AND FRIDAY'S FUNERAL MASS HAVE BEEN CANCELED. The family would like to thank everyone for their sympathy and understanding in this difficult time. Richard Martel, 85, of Oceanport, passed away peacefully at his home surrounded... View Obituary & Service Information

The family of Richard F Martel created this Life Tributes page to make it easy to share your memories.

Send flowers to the Martel family.