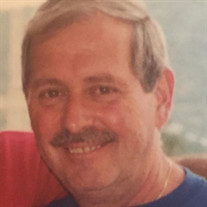 Robert “Bob” Alan Grant, 69, a resident of New Jersey for 18+ years, formerly of East Northport, NY and originally from Greenfield, MA, passed peacefully in the comfort of his home with the love of family near on Friday, December 30, 2016. He was born the son of the late Muriel (Loveland) and Edric Grant on July 5, 1947 in Greenfield, MA. He was educated in Greenfield and graduated from Greenfield High School class of 1965. On July 7, 1966 during the Vietnam war he enlisted in the U. S. Navy. He served his country as an engine mechanic in the submarine service. Bob was stationed on the U.S.S. Croaker SS-246 and the U.S.S. TUSK SS-426 based out of Groton, CT. He served his four-year enlistment and was honorably discharged at the rank of (EN-3) Petty Officer 3rd Class. On September 28, 1968, he exchanged vows with Angela Linda Caracciola at St. Martin of Tours in Bethpage, New York. They were married with family and friends in attendance and have been married for forty-eight years. Bob felt it necessary to continue in his education. So, he went back to school and graduated from the University of Massachusetts with a Bachelor’s Degree in Architecture class of 1974. Bob worked for the Port Authority of NY and NJ as a Senior Project Manager where he retired in 2013. Prior, he had worked for Grumman Aerospace Corporation and then Merrill Lynch as Vice President of Projects and Architecture. Bob enjoyed many things in life. He was a man who loved to smile and was full of fun. Time was spent skiing and golfing in his younger years. He enjoyed spending time with his family and friends. When time permitted, he went on trips with his wife and family. He is survived by his wife Linda Grant of Tinton Falls. His son Bob Grant and his wife Darlene of Melville, N.Y. His daughter Jennifer Kik and her husband Elie of West Orange, N.J. Five grandchildren Abby & Josie Grant, Oliver Kik, Brody Grant and Nathan Kik. His sisters June and Paul Kemp of Orange, MA. and Gayle Grammarosa of Greenfield, MA. Brother in-law John Herrick of Townsend, VT. In addition, he leaves cousins, nieces, nephews, extended family and friends. Bob is pre-deceased by his sister Linda Herrick and brother in-law Mike Gramarossa. Visitation will be held on Wednesday, January 4th from 2-4 PM and 7-9 PM at Bongarzone Funeral Home, 2400 Shafto Road, Tinton Falls. Funeral ceremony will be on Thursday at 11:00 AM at Bongarzone Funeral Home. Burial to follow at Woodbine Cemetery & Mausoleum, Oceanport. Donations may be made to the American Cancer Society, www.cancer.org.

Robert &#8220;Bob&#8221; Alan Grant, 69, a resident of New Jersey for 18+ years, formerly of East Northport, NY and originally from Greenfield, MA, passed peacefully in the comfort of his home with the love of family near on Friday, December... View Obituary & Service Information

The family of Robert Alan Grant Sr. created this Life Tributes page to make it easy to share your memories.

Send flowers to the Grant family.