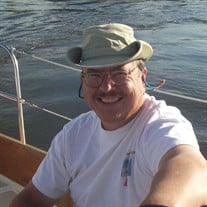 Russell Clyde Wagnon, 66 years of age, passed on Monday, April 24, 2017 in the company of family and friends after an extensive battle with a malignant brain tumor. Russ was born July 15, 1950 in Ashland, Oregon to the late Clyde and Mary Alice Wagnon. He was the oldest of three children, survived by Delores and preceded by James Stanley. His youth was spent in Hawaii, California, and Oregon where he developed a lifelong passion for the outdoors. Russ attended the United States Military Academy at West Point, NY graduating in 1972 with a BS in Applied Science and Engineering. In 1979, he received his MSEE in Electrical Engineering from the Georgia Institute of Technology. Russ spent 20 years in the US Army before retiring from active duty as a Major, with time spent at diverse locations including West Point, Fort Bragg, Fort Gordon, Fort Leavenworth, Germany, and Korea. After his active duty service, he spent another 20 years as a civilian contractor in support of programs based in Fort Monmouth and the Aberdeen Proving Grounds. While attending West Point, Russ met his wife, Gweneth, and they were married in June of 1973. Together, Russ and Gwen raised three sons, Brian, Kevin, and Scott in Tinton Falls since 1987. His voice became synonymous with Pop Warner football for many years in the ‘90s as he announced the games for the local teams while his sons played. Russ passed on his passion for the outdoors to his sons, and the community, by taking on various adult leadership roles in the local Boy Scouts of America troop. Later in life, he pursued his interest in sailing, where he could often be seen around the docks of the Monmouth Sailing Center or on his boat, the Sea Owl, in the local waters. Russ was a loving son, brother, husband, father, and to many, a friend. He leaves behind his wife Gwen, and their sons, Brian, Kevin, and Scott; his sister, Delores, and her husband, David; his siblings-in-law, Adele and Gregory; his close and devoted family friend, Kelly; two cats, Raven and Zeus; and many nieces, nephews, and numerous friends. Visitations will be from 2:00 to 4:00 pm and 7:00 to 9:00 pm on Friday April 28th at Bongarzone Funeral Home, 2400 Shafto Road, Tinton Falls. A Funeral Mass will be offered at 10:00 am on Saturday April 29th at the Church of Saint Dorothea, 240 Broad Street, Eatontown. Burial of cremated remains in West Point Cemetery will be held on Friday, June 2nd at 1:30 pm. In lieu of flowers, donations in his memory may be made locally to the David S. Zocchi Brain Tumor Center at Monmouth Medical Center, or to the National Brain Tumor Society at braintumor.org. For online condolences, please visit his memorial website at www.bongarzonefuneralhome.com

Russell Clyde Wagnon, 66 years of age, passed on Monday, April 24, 2017 in the company of family and friends after an extensive battle with a malignant brain tumor. Russ was born July 15, 1950 in Ashland, Oregon to the late Clyde and Mary... View Obituary & Service Information

The family of Major Russell C. Wagnon (Ret) created this Life Tributes page to make it easy to share your memories.

Send flowers to the Wagnon family.