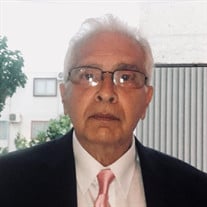 Sergio Omar Scrollini passed away on February 11, 2018 at 72 years old at Robert Wood Johnson Hospital in New Brunswick, New Jersey. He resided in Tinton Falls, New Jersey and was born on February 24, 1945 to Maria Elisa Camacho and Valentin Scrollini in Maldonado, Uruguay. Sergio spent his childhood in Maldonado with his two siblings, Maria Cristina Scrollini (65) and Hermes Scrollini (75). He was a sweet and shy child and close to his family. His family called him Omar and his friends nicknamed him “Gato”. He moved to Montevideo to study Law after high school and worked at a post office through college. Sergio then moved to Spain seeking more opportunity. Deciding Spain wasn’t for him, he made plans to go to the U.S. When Sergio came to the U.S., he met Faye in 1972 and they fell in love. Sergio proposed a year later, and they married on November 17, 1973. Sergio and Faye spent years traveling the world together and then started a family in 1983 with their first daughter Natalie. Their second daughter Daniella was born in 1986 and Sergio is survived by both. Sergio did a variety of things throughout his career, from restauranteur to insurance while always being a supportive husband and doting father. He enjoyed traveling and spending time with family. Sergio loved spending days at the beach and relaxing. He had an infectious sense of humor and was always positive. Everything was “beautiful” or “fantastic“ even if it wasn’t. Everyone who met him, loved him and he touched the lives of many with his kindness, generosity, and humor. Sergio Scrollini will be deeply missed by many. Sergio is survived by his wife Faye Scrollini; his two daughters Natalie and Daniella; his mother Maria Elisa Camacho; his two siblings Maria Cristina Scrollini and Hermes Scrollini; and his three nieces and two nephews. Sergio is predeceased by his father Valentin Scrollini. Visitation will be 7 to 9 PM on Tuesday, February 13 at Bongarzone Funeral Home, Tinton Falls, NJ. Funeral Ceremony will be held at 11 AM on Wednesday, February 14 at Bongarzone Funeral Home. Interment will take place at St. George Greek Orthodox Cemetery, Neptune, NJ. Memorial donations may be made to St. Demetrios Church, 41 Wisteria Street, Perth Amboy, NJ 08861.

The family of Sergio O. Scrollini created this Life Tributes page to make it easy to share your memories.

Send flowers to the Scrollini family.