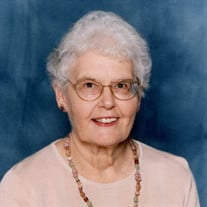 Sheila S. McBride, 91, of Seabrook Village, passed away peacefully at home on December 27, 2019. She was born and raised in Detroit, MI and graduated from Wayne State University with a home economics degree. Until starting a family, Sheila worked as a consumer service representative for Michigan Gas Co in Ann Arbor, where she wrote recipes and held demos for gas appliances. While living in Ann Arbor, she met her husband, John. Sheila and John raised their family in Tennessee and then Delaware. John’s career took them several more states before they retired, and she always found a way to make each new place into “home.” In her younger years, she was an active member in the alumni program of her college sorority, Alpha Sigma Tau, as well as an avid baker (particularly at Christmas!). In her later years, she enjoyed crossword and jumble word puzzles, and was a huge sports fan. Her favorite teams were the Washington Nationals (so glad she got to see their World Series victory this year!) and her beloved Michigan Wolverines. She was a devout Catholic, and took comfort in watching Mass on the EWTN channel when she could no longer attend in person. Sheila was predeceased by her beloved husband John J. McBride; her parents Luke and Becky Stefanac; her brother John Stefanac; and her brother-in-law Neil McBride. She is survived by her daughter Patricia Vollherbst (Keith); her son David McBride (Maria Kiwalle); five grandchildren: Gretchen Aland (John), Luke Vollherbst, Kerry Vollherbst, Theresa McBride, and Jacqueline McBride; and three great-grandchildren: Rowan, Deacon, and Peyton Aland. Sheila’s visitation will be held in church from 10 AM until her funeral mass at 11 AM on Tuesday, December 31, 2019 at the Church of Saint Anselm, 1028 Wayside Road, Tinton Falls, NJ 07712. Entombment will follow at St. Magdalen Cemetery, Flemington, NJ. In lieu of flowers, donations may be made to the Seabrook Scholars Program, 3000 Essex Rd, Tinton Falls NJ 07753, which helps defray college costs for students working at Seabrook Village, or EWTN. For directions and online condolences, please visit Sheila’s memorial website at www.bongarzonefuneralhome.com

Sheila S. McBride, 91, of Seabrook Village, passed away peacefully at home on December 27, 2019. She was born and raised in Detroit, MI and graduated from Wayne State University with a home economics degree. Until starting a family, Sheila... View Obituary & Service Information

The family of Sheila S. McBride created this Life Tributes page to make it easy to share your memories.

Send flowers to the McBride family.