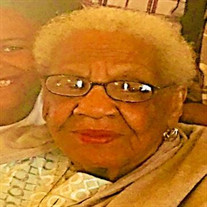 Thelma L. Evans was born in Portsmouth, VA. On January 19, 1927 to Roland D. Simon and Alma Brown. She was educated in the public school system of Portsmouth and graduated from I.C. Norcom High School in 1945. She then relocated to Neptune, NJ and attended Monmouth College to pursue a career in nursing. She then met and fell in love with the boy next door, James E. Evans Sr. They were married on June 29, 1951 and from that union four children were born. Thelma joined the Second Baptist Church of Asbury Park under the pastorage of the late Rev. J.H. Ashby and remained an active member until she could no longer attend weekly services. While attending she participated in many organizations and activities to include the Ladies Usher Board, the Women and Mothers of the Years Organization, Women’s Ministry and the Music Ministry. She also volunteered for several years in the Vacation Bible School Program serving as a bus aide. For many years Thelma was employed at Roxanne’s Swim Suits as a sewing machine operator. After retiring from Roxanne’s, Thelma made the decision to continue working and was employed for several years as a bus aide for Laidlaw Bus Company. Thelma was a faithful member of Adah Chapter No. 17 OE.S., P,H,A, where she served as the Worthy Matron from 1989 to 1990. She was also a member of the Heroines of Jericho. Thelma was predeceased by her parents, Roland D. Simon and Alma Brown Scott, her husband James E. Evans Sr., her son James E. Evans Jr., her daughter Rebecca A. Byrd and granddaughter Robbyn Spence. She leaves to cherish her memories, her daughter Patricia M. Evans, her son Rev. Benjamin A. Evans Sr., her daughter Ann Davis, her loving daughter-in-law Kimberley Evans, daughter- in- law Valerie Wake Evans; her two brothers Hollis B. (Lillian) Scott and Roland D. (Lynne) Simon. She is also survived by her grandchildren, James E. (Shannen), Jermaine A. (Terri), Louis D. Byrd (Rachel), Dwayne M, Stephanie I.V. (Calvert) Peart, Monique R., Benjamin A. Jr. (Vilma), Tiffany M., Charles Coursey and Yamila (Shawn) Nelson, 23 great grandchildren, a host of nieces, nephews, cousins and friends.

Thelma L. Evans was born in Portsmouth, VA. On January 19, 1927 to Roland D. Simon and Alma Brown. She was educated in the public school system of Portsmouth and graduated from I.C. Norcom High School in 1945. She then relocated to Neptune,... View Obituary & Service Information

The family of Thelma L. Evans created this Life Tributes page to make it easy to share your memories.

Send flowers to the Evans family.