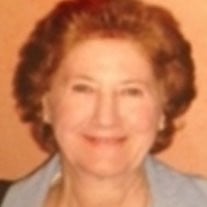 Vinnie Uliano Smorra AGE: 88 • Shrewsbury Vinnie Uliano Smorra, 88, passed away peacefully on Wednesday, March 6, 2013, at her residence the Sycamore, Assisted Living Facility, Shrewsbury. She was born Sept. 13, 1924, in Newark, the daughter of Michael and Rachel (nee Trabucco) D'Amore. Vinnie graduated from East Side High School, Newark in 1942. After graduation, she was employed by the Prudential Insurance Co. and upon his return from 3 and half years of service in World War II, married James J. Uliano in 1946. James died in 1952, and she raised their son, Charles, as a single parent, until marrying Joseph J. Smorra in 1960, and settling in Oakhurst. Vinnie and Joseph Smorra raised their combined family and were married for 46 years, until Joseph's death in 2006. After raising her family, Vinnie worked for the Monmouth County Board of Social Services until her retirement in 1989. She was a devoted wife and mother, a remarkable friend to all who knew her. She truly enjoyed a wonderful life. Surviving are her children, Charles J. Uliano and his wife Ann of West Long Branch; her daughter, Elaine DeGrande and husband Dr. Gary of Brick; and her son, Joseph A. Smorra and his wife, Martha of Lakewood; her grandchildren, Laura Erb and husband Jay of Sudbury, Mass., Michael DeGrande and his wife Dana of Mullica Hills, J.J. Uliano and his wife Kelly of Spring Lake Hgts., Elizabeth Giblin and her husband Peter of Oceanport, and Danielle Palendrano and her husband Jay of Wildomar, Calif.; and her great-grandaughters, Julliana Erb, Isbella Erb, Grace Uliano and Emma Rose Uliano. Vinnie was one of eleven children, she was predeceased by her sister, Rose Dasaro; and brothers, Nathan D'Amore, Joseph D'Amore, and John D'Amore. She is survived by brothers, Patrick D'Amore of Belleville, Michael D'Amore of West Patterson, Carmine D'Amore of Toms River; and sisters, Mary Ancmon of Pompton Plains, Sarah Leonardo of Lincroft, and Rachel Davis of Toms River. Her family would like to thank the Sycamore Assisted Living Facility for the excellent care she received for the past five and half years, and the kindness and comfort of the Care Alternative Hospice for their work with mom. Visitation from 2 to 6 p.m. Sunday, March 10 at the Bongarzone Funeral Home, 2400 Shafto Road, Tinton Falls. Relatives and friends are welcome attend the funeral at 9 a.m. Monday, March 11, 2013 at the funeral home. Thence to St. Michael's Church, 800 Ocean Ave., West End (Long Branch), where at 10:30 a.m., the Funeral Mass will be offered. Entombment St. Catherine's Cemetery, Sea Girt. In lieu of flowers, donations to the Alzheimer's Association , P.O. Box 96011, Washington, DC 20090 or at alz.org would be appreciated.

The family of Vinnie Uliano Smorra created this Life Tributes page to make it easy to share your memories.

Send flowers to the Smorra family.