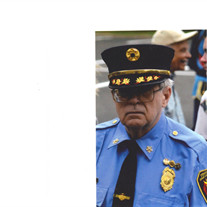 William John Wolf Jr., 76, A resident of Tinton Falls for over fifty years, passed away peacefully on Saturday October 10, 2015, surrounded by his sons at the New Jersey Fireman’s Home, Boonton, N.J. John suffered in his last years from Alzheimer's disease. He was born in St. Louis, Mo., and moved from there in 1961 and began his lifetime career as an Electrical Engineer with AT&T and was employed at Bell Labs in Holmdel, NJ. For 40 years before retiring in 1996. John joined the Tinton Falls Fire Company No. 1 and was an active member until his disease prevented his participation. His passion was for the Fire Company as was his willingness to help his community. John was an Ex-Chief, Past President and Lifetime member of the Fire Company. A mentor in Scouting for many years, he enjoyed camping, bicycling and continuing education. John was predeceased by his wife of 53 years Eloise , and is survived by his sons; William, Gregory and Brian Wolf, his daughter-in-law Barbara, three grandchildren; Jesseca, Zachary and Brandon, and two great-grandchildren Emma and Jackson. He is also survived by a sister Marilyn Faszold and brother Tom Wolf. Visitation will be from 2:00 p.m. to 4:00 p.m. and 6:00 p.m. to 9:00 p.m. on Friday October 30, 2015 at the Bongarzone Funeral Home, 2400 Shafto Road, Tinton Falls. Entombment at Woodbine Cemetery & Mausoleum, Oceanport will be private. In lieu of flowers donations may be made to the New jersey Firemen’s Home, Boonton, N.J. or the Alzheimer’s Foundation.

The family of William John Wolf Jr. created this Life Tributes page to make it easy to share your memories.

William John Wolf Jr., 76, A resident of Tinton Falls for over...

Send flowers to the Wolf family.